In response to Chicago Spring, CPS throws up the barricades

Sunday it was the postal workers marching downtown to protest the end of Saturday delivery. Yesterday it was the students demanding an end to school closings and 1,000 more "running the streets" for immigration reform. But the big one is tomorrow's citywide march which I'm predicting is just the beginning of a Chicago Spring.

Who knows where they are going to hide Rahm this time around? He probably can't go back to Utah so soon. It looks like he and BBB will just have to huddle together in their offices and sweat it out as thousands of angry parents, teachers, clergy, students and community residents march against school closings.

It's a good thing for the mayor that the barricade builders haven't been pink-slipped yet. CTUnet reports that BOE security began erecting metal barricades around the building today. Metal ones are supposedly better because they can't burn and protesters will likely hurt their knees climbing over them.

I'll also be checking the sky for drones. 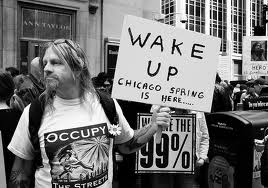 The CTU has also published a SECRET MEMO that went out to CPS principals, warning them about possible civil disobedience and assigning them to spy on demonstrators, and take note of media.

CReATE members buoyed by the publication and wide distribution of their Research Brief on School Closures, will be making signs at the Cultural Center, 78 E Washington St, from 3:00-3:45 and then marching over to the rally point at the Daley Center.

CReATE's Stephanie Farmer, a Roosevelt prof, gets a SmallTalk Salute for doing such a good job on Chicago Tonight, having to take on a DFER charter/voucher promoter and someone from the Archdiocese hunting for public funds for Catholic schools. Stephanie was determined to stick to the research and presented it well. .
Posted by Mike Klonsky at 9:20 PM