Am I getting too old for these long road trips? I hope not. I just need more time to recover, that's all. I left Occupy the DOE yesterday to get back to work and family business. We drove straight back to Chicago in 12 hours. Lots of time to witness spring's colorful rebirth, listen to some great music and contemplate life in America's heartland.

But what you don't see out the car window is the bubbling up of anger and frustration people in small towns and big cities over their steadily worsening economic conditions and their accompanying feelings of political powerlessness. The latter is driven by the steady erosion and selling off of public space and with it, public decision-making. Which political force will capture this anger and how will it express itself in the upcoming elections is anybody's guess.

Occupy the DOE was part of a young but growing movement to change all that. Taking part left me feeling at once elated, encouraged, and frustrated--elated as I always am when I get to spend time in the company of good people. The United Opt-Out organizers, like Morna McDermott McNulty, Laurie Murphy, Peggy Robertson, Tim Slekar and Ceresta Smith, pulled this 4-day event together on a shoestring, right outside Arne Duncan's window. They are among those good people who see clearly the damaging effects on schools and children of standardized testing and current corporate-reform policies and are willing to do something about it.

I was encouraged by the strength of the presentations and speeches by some of the best scholars and education activists in the country --Stephen Krashen, Ira Shor, Linda Nathan, Ann O’Halloran, Ruth Rodriguez-Fay, Mark Naison, David Greene,  Jesse "Walking Man" Turner, Jim Horn, Brian Jones ... the list goes on and on. This was a nothing less than an engaging and powerful  four-day course, in a small school, taught by great teachers, all about the struggle for democratic education in America. I hope these presentations will be made widely available in the months ahead.

I heard that yesterday, after I left, Duncan invited a small group of organizers inside the DOE for a meeting and am eagerly awaiting to hear what they discussed and what kind of response the meeting generated. 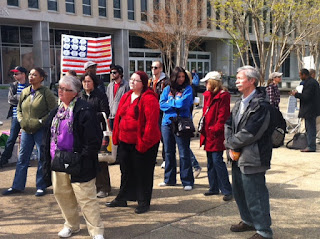 Like most of the participants I spoke with, I was frustrated at the miniscule turnout which could be measured in dozens, not hundreds or thousands. I felt the same way after our SOS March and Rally last summer which drew a few thousand teachers instead of the tens of thousands I had hoped for. Similar feelings of frustration are expressed in David Greene's post, "Where have all the teachers gone?" But rather than blame teachers for being no-shows, I would rather that we organizers and activists focus on our strategies. Teachers, parents and students mobilize through their unions and existing community-based organizations. Without their active participation, no national action is going to be very large or attract much media coverage.

The core of this Opt-Out movement is strong. But its base is still narrow. Could it have something to do with the group's limited focus? Could outreach and publicity have been better? I don't know. But it raises all kinds of strategic and tactical questions for me, especially with our own SOS Convention coming up in August.

One thing I know:  there is massive opposition building to corporate school reform policies and to the standardized testing madness. I saw the depth and breadth of this base in the Wisconsin protests and the anti-Walker recall movement (elections are today) and the beating back the attacks on unions and teacher's collective-bargaining rights with SB 5 in Ohio and the Parent Trigger law in Florida. Here in Chicago, there is a broad-based community movement building against school closings and turnarounds led by a militant teachers union.

But the fact is, we are still on the strategic defensive while our opponents not only control federal and local policy but have tons of private corporation and foundation money behind them. Joanne Barkan's excellent piece in Dissent gives us a good picture of what we are up against.

My hope is that Occupy the DOE will be the start of something great and powerful and that it will generate some thoughtful dialogue in coming weeks, within the movement, about tactics and strategy.

Email ThisBlogThis!Share to TwitterShare to FacebookShare to Pinterest
Labels: Occupy