"That is why the labor-hater and labor-baiter is virtually always a twin-headed creature spewing anti-Negro epithets from one mouth and anti-labor propaganda from the other mouth." -- Dr. Martin Luther King, AFL-CIO Convention, December 1961

Yesterday was the anniversary of the 1968 assassination of  Dr. King, who was killed while defending the rights of black public workers in Memphis, to unionize. How ironic then, 44 years later, to hear school reformer Geoffrey Canada's declaration of war on the teachers union.

Canada, the founder of the Harlem Children's Zone and co-star, along with Michelle Rhee, in the anti-teacher, propaganda film, Waiting For Superman, was quoted in Tuesday's New York Times:


Ms. Rhee and Mr. (Joel) Klein have a confrontational history with teachers’ unions. But some charter school leaders and other advocates have spoken of the need to lower the temperature of the debate and have turned their focus inward on improving their own schools.

“Folks are genuinely looking for opportunities to make peace and not war,” Mr. Canada said. “And I think that’s terrific. But someone has to make war.”

In making his declaration, Canada, who is fond of quoting Dr. King in his speeches, joined hands with the worst of the worst education privatizers and profiteers whose hatred of unions is understandable. They include, Rhee and Klein (front man for international criminal Rupert Murdoch), Micah Lasher, who runs Mayor Bloomberg's legislative affairs, and charter profiteer Eva Moskowitz. Together, they announced the formation of StudentsFirstNY, a heavily-funded group that intends to pour money behind anti-teacher union candidates in upcoming election campaigns. 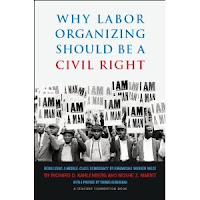 Thanks to Richard Kahlenberg for sending me a copy of his and Moshe Marvit's new book, Why Labor Organizing should be a civil right. The book begins with the recounting of Dr. King's role in the supporting organized labor, which he considered part and parcel of the civil rights movement. King was also highly critical of those union leaders who had allowed racially segregated local unions into the AFL-CIO.

King declared in his famous Chaos or Community speech in 1967:


The displaced are flowing into proliferating service occupations. These enterprises are traditionally unorganized and provide low wage scales with longer hours. The Negroes pressed into these services need union protection, and the union movement needs their membership to maintain its relative strength in the whole society.