Coming next week to a neighborhood near you 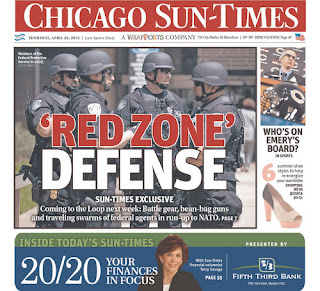 Was this version of The Surge, Rahm's idea or John McCain's? Will the troops be stationed here permanently? Will they be using drones along with boots on the ground, to attack anti-war protesters? How long will the First Amendment of the U.S. Constitution be suspended?  These are some questions I have for the Mayor. It appears that members of the Host Committee have more.


The head of Chicago’s NATO Host Committee said Thursday she was blindsided by the federal government’s decision to create a militarized “Red Zone” in the Loop to protect federal buildings in the run-up to the May 20-21 summit at McCormick Place.

The image of federal agents on downtown streets far from McCormick Place — in battle gear, weapons slung — three weeks before the summit is certain to have a chilling effect on those who live and work in the Loop. It also calls into question Host Committee Executive Director Lori Healey’s oft-repeated message that Chicago will remain “open for business” during the summit. -- Sun-Times

I also wonder if martial law in Obama's home town is the image that Axelrod and his team want the world to see in the days leading up to the Nov. election?
Posted by Mike Klonsky at 10:00 PM