It only makes sense that a day after gutting health insurance coverage for million of mostly poor, sick and elderly Americans, Trump would make historically black colleges and universities (HBCUs) his next target. Along with threatening to take away federal funding, he's also targeting after-school programs and other ed-related initiatives that support Native Hawaiian and Alaskan Native education on the grounds that they are "race-based" and therefore "unconstitutional".

As if all education in this country hasn't been largely race-based since the days when it was unlawful to teach black slaves to read. It wasn't until the Reconstruction period in the south after the Civil War that freed slaves brought us the first truly public school system in this nation's history. The defeat of Reconstruction and the Jim Crow era that followed, along with the failure of post-Brown v. Board integration, north and south, has left us with the widening two-tiered school system we have now.

HBCUs were and continue to be a response (one of many) to the long history of what I call, white affirmative action. So much for all the Trumpian rhetoric about "school choice".

It's also important to note there’s been no court finding or litigation suggesting racial discrimination at HBCUs regarding admissions or faculty hiring.

Lots have changed since then. But not that. 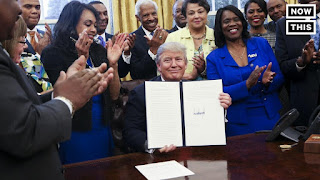 In February, Trump invited more than 60 HBCU presidents into the Oval Office, where he signed an executive order proclaiming his support of the schools. Turns out, he meant support in the way a rope supports a hanging man.

Enter Trump's newly-appointed schools chief Betsy DeVos, the bible-thumping billionaire, grand dame of  vouchers, privately-run charters and other forms of "school choice". Her photo-op visits to public schools were met with protests and rightfully seen by many parents, teachers and ed activists as a kiss of death for public education. The same can be said about her appearances at HBCUs.

Now I see that DeVos has been invited to give the commencement speech at HBCU Bethune-Cookman, a school founded by Dr. Mary McLeod Bethune to provide African-American students with the opportunity to gain access to higher ed at a time when black students were refused entrance into colleges and universities across America.

It was back in February when DeVos called HBCUs, "real pioneers of school choice", as if the long, continuing history of institutional racism and official segregation in higher education had never existed and that black colleges were simply a matter of private entrepreneurship or "bootstrap" self-help. The uproar that followed forced her to try and walk back her statement.


Tone-deaf, uninformed statement from DeVos. #HBCUs weren’t “more options” for black students – for many years, they were the ONLY option. pic.twitter.com/fD58rXpHIt
— Rep. Barbara Lee (@RepBarbaraLee) February 28, 2017

The New York Times called her statement, "a gaffe" and to some degree it was. But I think it was also a testing of the waters, as is Trump's statement on Friday.

It's not just about the elimination of federal funding for HBCUs, but Republican plans for a complete and total roll-back of the hard-fought gains of the civil rights movement on the grounds that equality for African-Americans and other oppressed minorities poses a threat and is discriminatory towards whites.

It's in some ways understandable that administrators at HBCUs, the United Negro College Fund (and urban public schools) would invite DeVos to speak. I'm sure they are hoping her appearance will bring their schools badly needed support (maybe a private donation from DeVos or Trump himself) and possibly delay the coming assault on historically black institutions.

But it will be interesting to see how DeVos is received at Bethune-Cookman by students and faculty who see through all the "bootstrap" rhetoric. I doubt that her appearance will go down smoothly.