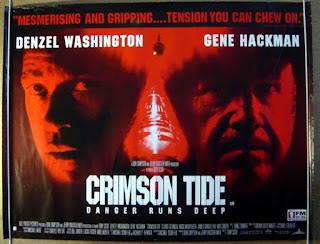 I'm not big on submarine movies. I watched Das Boot on a flight to Europe once and between the depth charges on the screen and the air turbulence over the Atlantic, I almost lost my dinner.

But DT's latest ravings have me thinking back to one in particular. In Crimson Tide, Denzel, who plays Hunter, the nuclear-armed sub's Lt. Commander, organizes a mutiny of sorts and strips the ship's war-crazed Captain Ramsey (Gene Hackman), of his command to stop him from launching a preemptive nuclear strike against Russia.

It's kind of a crappy movie, even with two of my favorite crappy movie actors, but I won't give away the ending in case you want to watch it for the first time on Netflix or wherever.

Reflecting back on Crimson Tide, I'm wondering just how long Trump's own minions are going to tolerate his dangerous nuclear war fantasies? Where is their Hunter who will confine their
Capt. Ramsey to his quarters in order to keep their leaky ship afloat?

If you're a teacher trying to make lemonade out of Trump's lemons, his ignorant rants about Pres. Andrew Jackson and the causes of the Civil War, can be teachable moments. Trump's ignorant statements are all over the media. Why not let students have at them?

Most common response to Trump has been simply..."The war was about slavery." Yes, in large part true. But it's important to know that northern leaders, including Pres. Lincoln, weren't abolitionists or necessarily opposed to southern slavery. Lincoln was a latecomer to the abolitionist position. But when the southern aristocrats and slavers moved to secede from the Union, war became inevitable. The war began in 1861, But the Emancipation Proclamation wasn't signed until 1863 and the 13th Amendment, which legally ended slavery, wasn't ratified until 1865.

When thousands of black slaves took up arms and joined the Union cause, the war transformed into a war for liberation and victory was assured.

Trump implied that the was was avoidable and that his role-model president,  Andrew Jackson was the man who could have prevented it.


"I mean, had Andrew Jackson been a little later you wouldn't have had the Civil War....he had a big heart. He was really angry that he saw what was happening with regard to the Civil War, he said 'There's no reason for this.'"

Actually Jackson, a vicious slaver himself and a genocidal murderer of Native Americans, had been dead for 16 years when the war started. But Trump is a believer in the great man (deal-maker) theory of history. This theory, which is used to counter the theory that oppressed people, with support from their allies, are the real history makers and shapers.

Definitely worth some class time for research, study and discussion. I will be talking to middle school students in classrooms next week about this very topic.

Email ThisBlogThis!Share to TwitterShare to FacebookShare to Pinterest
Labels: Trump