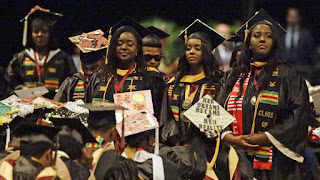 Less than a week after Pres. Trump threatened to cut off funds for Historically Black Colleges and Universities (HBCUs), his ed secretary, Betsy DeVos was invited to Bethune-Cookman  to deliver the commencement speech. At her side, hoping to run interference, was Trump cheerleader and "highest ranking" African-American in the White House, Omarosa Manigault.

The outcome was predictable. Both Manigault and DeVos were greeted with a chorus of boos which continued throughout DeVos' speech even as B-CU administrators threatened to withhold the graduates' diplomas if they kept it up. The more they threatened, the louder grew the jeers.

Much of the students' anger was directed at B-CU Pres. Edison Jackson who has jumped into bed with Trump in hopes of winning favor and getting some alms for his beleaguered school.


#BlackLivesMatter: Graduating students turn their back on Betsy Devos when she started her commencement speech pic.twitter.com/nAfiYJhfjm
— Muhammad (@330Kingish) May 11, 2017


Trump has tried to make the case that HBCUs are "unconstitutional" and discriminatory against whites. Two nights later, after a storm of criticism, the White House "walked back" the threat in a statement that declared the president’s “unwavering support” for such schools.

Back in February, DeVos caught hell for her ignorant description of HBCUs as "real pioneers" of "school choice" rather a righteous a response to Jim Crow and blacks being excluded from all-white colleges and universities. Yes, you guessed it. Another walk-back. She even misspelled the name of W.E.B. DuBois in her statement.

DeVos opened her speech with this:


“One of the hallmarks of higher education, and of democracy, is the ability to converse with and learn from those with whom we disagree. And while we will undoubtedly disagree at times, I hope we can do so respectfully. Let’s choose to hear each other out.”

This has been a theme over the past few months as campuses from UC Berkeley to the Univ. of Chicago have been overrun with gaggle of highly-paid or powerfully-positioned, racist or neo-fascist speakers like Milo Yiannopoulos and Ann Coulter. When students or community activists turn out to peacefully protest, they are accused of being "disrespectful" or denying them their right of free speech. The very people who monopolize the media and who tightly control the reins of power, try and play the victims. DeVos is a great example.

DeVos didn't come to Bethune-Cookman to have a dialogue with the students. She was there for a political photo-op, carrying water for Donald Trump and a regime which has total, 24/7 access to mainstream media. It's the black students whose voices have been silenced. But not this time.

The day before her speech members of the B-CU community delivered a petition that had been signed by over 50,000 people requesting DeVos’ removal as commencement speaker.

She closed her speech by warning students not to join the "chorus of conflict" and to face her regime's assault "with a mindset of grace."


“You don’t send your graduating class out into the world like this,” said Tyler Durrant, a 2017 graduating senior at Bethune-Cookman University, to The Daily Beast. “Commencement is a monologue and not a dialogue, and that is one of the most important things we’re trying to bring to light here. After she speaks, we won’t speak.”

People are outraged, said Fed Ingram, vice president of the Florida Education Association and a graduate of the school. Ninety percent of students who attend Bethune-Cookman were educated in public schools, he said. “This is a woman who throughout her ‘career’ has condemned public schools, has said these are dead-end schools.”


A side note... AFT Pres. Randi Weingarten who has been supportive of DeVos' school visits and has been critical of anti-DeVos protesters, nothing to say about the Bethuse-Cookman student protest. Her comment to the Washington post was critical of "choice" without mention of DeVos.


Randi Weingarten, president of the American Federation of Teachers, said Tuesday, “The kids have worked really hard at a historically black college without the resources they need to get an education in a school that was created because of segregation and discrimination.” The choice movement grew out of segregation, she said. “Those of us who are neither students nor alums are just a megaphone,” she said, for that message.