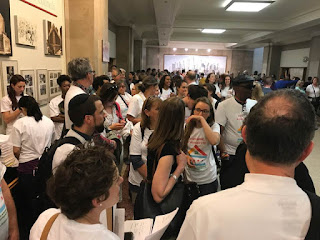 I was part of the large crowd that packed the City Council chambers yesterday in support of Ald. John Arena's affordable  housing initiative in his 45th Ward. In past hearings, we've been out-organized by fear-mongering and (yes, I'll say it) racist groups who have spread fear of  an "invasion" of  renters, war veterans, people with disabilities, immigrants and people of color.

In this case, the fear mongering was led by John Garrido, who lost twice to Arena in previous elections and neighboring 41st Ward Ald. Anthony Napolitano. Garrido's forces have been organized into Northwest Side Unite and the Northwest Side GOP Club. Another local group, the Jefferson Park Neighborhood Association, which opposes the project, has a longtime policy of opposing up-zoning in the area. The opposition gets it money from Liberty Principles, a right-wing PAC funded by Dan Proft.

Their arguments at yesterday's Zoning Committee hearing, often began with the disclaimer, "I'm not a racist..." A dead giveaway. And then there are some who claimed they would support the project if it was reduced to only four stories. Others claimed they were defending "local control" of their Jefferson Park, Addison Park and Portage Park neighborhoods against the "outsiders" from other areas of the city, bent on stirring up trouble. It's a tactic right out of Saul Alinsky's playbook and a reason I never bought into his model of community organizing. Ironically, Alinsky's book, Rules For Radicals, is the featured book for GOP Club's May reading group.

The developer of the building at 5150 N. Northwest Hwy. has agreed to make 20 of the apartments fully wheelchair accessible. Another 20 will be reserved for veterans. But if the height or number of apartments were reduced, the set-aside apartments would become unafordable.

The Sargent Shriver National Center on Poverty Law warned the city’s Law Department that rejection of the project could be viewed as fair housing discrimination under federal civil rights laws.

Open and mixed income housing has always been more than a local ward issue in Chicago, often referred to as the most segregated city in the nation (see video below). This was clear to progressive groups like the Chicago Housing Initiative and Access Living who provided most of the troops at yesterday's hearing.

The hearing itself was almost painfully democratic, with speakers from both sides holding forth from two in the afternoon, into the early evening. But the final vote in support of Arena's plan was unanimous.