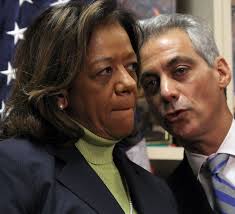 On Friday, former Chicago Public Schools CEO Barbara Byrd-Bennett was sentenced to 4.5 years in prison for defrauding students and taxpayers with a no-bid contract with SUPES, her former employer---a contract approved unanimously by the unelected Chicago Board of Education. BBB's connection to SUPES was considered "a plus, not a negative" by the Board, according to Andrea Zopp, board member at the time.

That's why I feel no joy in BBB's well-deserved 4.5-year prison sentence. Another black person in prison does nothing to repair the damage that's been done to the students, parents and educators victimized by the SUPES scam engineered by her partner in crime, Gary Solomon.

If justice were really to be served, its hand would have reached much higher, not only to Rahm's hand-chosen board members like Zopp who approved the deal, but to the mayor himself who knew full well what his CEO was up to and obviously OK'ed the deal, and then let BBB take the fall.

If we don't succeed in ridding our city of mayoral control of the schools and establishing our right to an elected school board, the jailing of Byrd-Bennett and her crew will amount to little.


An elected school board bill HB1774 passed committee 18-1 in March in the IL House, but a lot of pressure is needed to ensure it keeps moving. We simply cannot let Springfield inaction kill this bill again.

What can you do? Channel your outrage into action:

Canvass with us - We're talking to neighbors about why we need an elected board in Senate President Cullerton's district this Saturday 10am-3pm. More info and RSVP here.

Call your state representative and state senator - Demand that they get the elected school board bill passed by the end of May. Find your rep and senator's contact info here.

Visit Springfield with us - RYH Action is planning an in-person advocacy day on Tuesday May 16. Let us know if you can commit to making the trip to talk to legislators face-to-face.

Nine out of ten Chicagoans want an elected board. Help us make that happen.