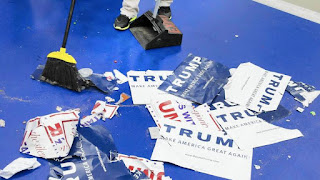 
“Do you think they saw that s--- coming? Hitler was just some hilarious and refreshing dude with a weird combover who would say anything at all.” -- Daily News

Michael “Quess” Moore, a founder of Take ’em Down NOLA


“He came to the heart and the bottom of the South, and he’s not welcome here.”  -- New Orleans Advocate


“There’s nothing short of Trump shooting my daughter in the street and my grandchildren — there is nothing and nobody that’s going to dissuade me from voting for Trump.” -- New York Times

Oakland Supt. Antwan Wilson, a graduate of the Broad Superintendents Academy, said he sympathized with some of the anger directed at him. But he scoffed at allegations that he is a puppet of the Broad Foundation.


“People can connect all kinds of dots,” he said, adding that “no Broad agenda has ever been shared with me.” -- New York Times


A new nationwide poll shows the American people overwhelmingly agree that public education should not exist to enrich and profit the charter school privatization movement and they are demanding strong regulatory laws to “rein in documented fiscal malfeasance by private charter schools.” -- Politicus USA

"Trump is a good businessman" He has a failed steak biz, a failed vodka biz & failed casinos. HOW DO YOU SCREW UP STEAK, VODKA & GAMBLING
— Lyle Clip Art (@Kyle_Lippert) March 6, 2016