Unlike a Rolling Stone... 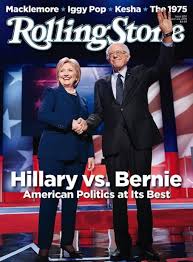 Rolling Stone Magazine is pissing in the wind with their endorsement of Hillary Clinton. I doubt if many millennials among their readership base are buying. They just don't think another war hawk in the White House bodes well for their future. Neither do I.


Hillary not only voted for the Iraq War, but offered a succession of ridiculous excuses for her vote. Remember, this was one of the easiest calls ever. A child could see that the Bush administration's fairy tales about WMDs and Iraqi drones spraying poison over the capital (where were they going to launch from, Martha's Vineyard?) were just that, fairy tales.

Yet Hillary voted for the invasion for the same reason many other mainstream Democrats did: They didn't want to be tagged as McGovernite peaceniks. The new Democratic Party refused to be seen as being too antiwar, even at the cost of supporting a wrong one.

Kevin Drum, writing in Mother Jones, responds to Taibi with a pitifully weak -- she's not that bad --defense of Hillary. He even makes this concession:


On a policy level, I don't get the sense that her foreign policy instincts have changed much based on events since 9/11, and that's by far my biggest complaint about her. Finally, I'm not thrilled with political dynasties.

Put this all together and here's what you get. Hillary's instincts on national security are troublesome. If that's a prime issue for you, then you should vote against her.

Thanks Kevin. I already have.

But it's not just about Hillary's foreign policy, ie. her support for the Iraq war; her prime role in the destruction of Libya as a viable state; her stated willingness to use nuclear weapons against Iran; her out-Trumping Trump in her pandering AIPAC speech; or the lunacy her policies helped create in Syria where forces backed by the CIA and battling forces backed by the Pentagon, that leaves me Hillary-horrified.

Unlike Drum, I can't separate foreign policy from domestic.

The toll of wars in Iraq and Afghanistan, the longest in modern history, in terms of blood and (at least $4 trillion) in treasury is unfathomable. Our inability to disengage in the slaughter, now called the eternal "war on terrorism", has not only brought that war home, but precipitated the massive structural imbalance in the U.S. and global economies, including the financial collapse, the great recession, bankruptcy of our public school systems, and steady downward pressure on wages and living standards.

As we learned during the Vietnam war, you can't have guns and butter both. Certainly not without an accompanying lost of freedom and civil liberties.
Posted by Mike Klonsky at 12:20 PM