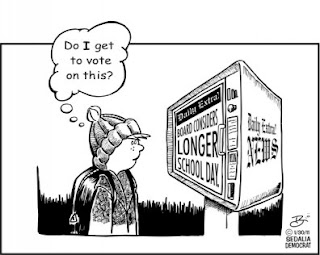 When Rahm Emanuel first ran for mayor of Chicago in 2011,  his education policy platform consisted of a demand for a longer school day and school year. As I pointed out back then, he made the case using  a bogus research model and Houston as his protype, a city where supposedly a longer school year had led to students "gaining three years" of learning time on Chicago students by the time they graduated.

But now, faced with a new budget crisis, Chicago, like Houston, is shortening its school day and year.  A new memo from CEO Forrest Claypool, tells principals to "stop spending" immediately.

Funny, you don't hear anyone talking much about Houston schools these days. There hasn't been another "Texas Miracle" since George Bush was governor and Rod Paige was Houston's superintendent.

It is not the length of time but the quality of time that truly matters here.” -- CTU President Karen Lewis

After his election, Rahm went ahead and imposed his faux-research-based plan on resistant schools, teachers and principals. He did it despite having no money in his budget to pay for it and without any plan for how the extra seat time could actually improve teaching/learning. It didn't take long before lack of funds and parent protests forced Rahm to scale back his program, ending it completely for elementary schools.

Now we see the chickens coming home to roost. More seat time not only failed to produce better learning outcomes for students, the added costs have contributed to the current budget shortfall and a resulting 3-day furlough for city teachers and canceling school on Good Friday (a Catholic religious holiday). In other words, a shorter school year and more chaos and confusion for teachers, parents and students.

Oh yes, and guess what's happening in New York's Success Academies, the corporate-reformers' favorite charter schools network? That's the one that distinguished itself from district public schools by the length of its school day.
Posted by Mike Klonsky at 4:53 PM