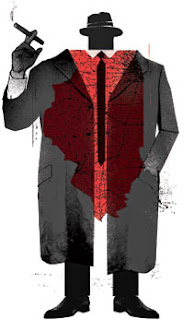 Dick Simpson, Tom Gradel & team document IL's "Banner Year of Corruption". Isn't every year? I suppose their annual report is like the Academy Awards of corruption.


While the Hastert indictment and conviction garnered national news headlines and was the most significant corruption story of the year, Illinois experienced many additional corruption events in 2015. In this report, we document 27 convictions, 28 indictments, and the launching of 11 corruption investigation. In addition we cover the sentencing of 30 public corruption convicts last year, most of whom were convicted in a year or two before 2015.

Chicago City Hall has long been awash in corruption and with the public school system directly under  control by the mayor, thievery, fraud, bribery, and no-bid contract kick-backs have become a way of life at CPS. The cost to school budgets is enormous.

The big one last year of course, so far as Chicago schools were concerned, was the FBI investigation launched exactly one year ago, leading to the arrest and indictment of Rahm Emanuel's hand-picked schools chief, Barbara Byrd-Bennett. The U.S. Attorney charged her with steering $23 million worth of contracts to her former employer, SUPES Academy. Two executives, Gary Solomon and Tom Vranas, who owned SUPES, the company itself, and another company they owned were also charged. On October 12, BBB pleaded guilty and is awaiting sentencing.

Yesterday it was announced that Rahm and his CPS board are suing BBB, SUPES and Synesi for $65M. Synesi is the consulting company behind the SUPES/BBB scandal. It was originally started by former CPS schools CEO Paul Vallas in partnership with Gary Solomon and other members of Vallas' Chicago team. Vallas was the master of soliciting no-bid consulting contracts from his network of pet district superintendents. Lucky for him, he fell out and split with Soloman before the shit hit the fan.

The suit made front-page headlines in Cleveland, where BBB long ruled the public schools, and in Detroit, where the SUPES kick-back scheme was originally concocted.


In the lawsuit, the Board of Educations states, "In plain terms, defendants have stolen money from CPS and the schoolchildren of the city of Chicago, and that money should be returned."

But I would argue that the investigation was stopped, as usual, before it got up too high, leaving BBB to take the fall herself. Board members like Andrea Zopp (now running for senator) who voted for the SUPES no-bid contract, and the Mayor himself, were complicit and should be held accountable.Why aren't they included in the suit?

More important, the suit should be a clarion call to end City Hall's direct control over the public schools and to pass the Elected School Board bill.

Trump to enter the belly of the beast is the headline on Natasha Korecki's story in POLITICO this morning.

There should be thousands on hand this afternoon to protest the Trump rally at the UIC Pavilion. The university should have never agreed to hold the rally here in the first place. Trump rallies have been marked by violence and thuggery directed mainly at black protesters.

Thousands of students have already signed up to be part of today's protests.
Korecki writes:


Doesn't know what he's in for: "Other immigrant groups, religious leaders and young African American protesters are expected to join forces in a public rebuke of Trump before his 6 p.m. rally. One group ... built an altar on Thursday and demonstrators planned to hold vigil all night in preparation for Trump's arrival.

'I don't think Donald Trump knows what he's in for here in Chicago,' UIC pre-med student Miguel Del Toral told POLITICO. 'We are very very active in our communities. We will not stand for bigotry, we will not stand for racism. He should expect to find this kind of resistance coming into a university with such a large minority population.'

People will gather at 4:30 p.m. in the parking lot across from the Pavilion.