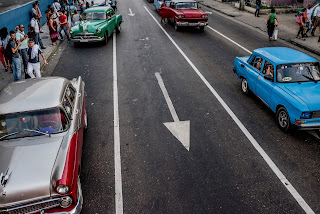 
U.S. policy toward Cuba hasn’t worked “since I was born,” Obama said in an interview with CNN en Espanol last week. Giving Cubans more access to commerce and the Internet may bring about bigger changes than the embargo ever could, Obama said. In relation to the rest of Latin America, he said, it means removing “this one lingering irritant or perception that somehow the United States was trying to big-foot smaller countries in the region.” -- Bloomberg


"I've had some people say this harms the kids, so my question back to them is: 'What do you want to do? Tell me what it is that you want to do.' You have to ask people questions if they have reservations," Lewis said Friday. -- Tribune


But few discuss the toll that black flight is having on Chicago, long a beacon for progress and employment for African-Americans stretching back to the days of slaughterhouses, steel mills and Pullman porters. -- Tribune


Almost $4.2 million was raised for or spent on Dunkin's campaign, almost all of it by Rauner's allies. That works out to about $1.4 million for every precinct Dunkin won. -- Capitol Fax