"It's disturbing to see so many of these schools still reporting such high suspension rates because that indicates charter leaders continue to pursue 'broken windows,' 'no excuses' and other forms of 'zero tolerance' discipline." -- Daniel Losen, the Center's director and the study's lead author.

A first-ever analysis of school discipline records for the nation’s more than 5,250 charter schools shows a disturbing number are suspending big percentages of their black students and students with disabilities at highly disproportionate rates compared to white and non-disabled students.

This from UCLA's Center for Civil Rights Remedies at The Civil Rights Project. It identifies 374 charter schools across the country that had suspended 25% or more of their entire student body during the course of the 2011-12 academic year. 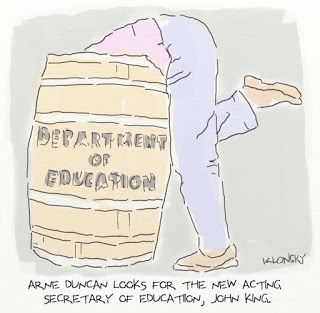 The study reveals that less than half of all charters fall into the high-suspension category. But that's still a hell of a lot. This count includes only schools with at least 50 students enrolled and excludes alternative schools, schools identified as part of the juvenile justice system, virtual schools and schools that enrolled fewer than 10 students with disabilities.

The passage of ESSA could make the problem even worse. While the new law calls upon states to take steps to improve learning conditions, including preventing the overuse of suspension, state laws that govern charter schools can exempt them from oversight.

State accountability plans must still be submitted by every state for review by U.S. Education Secretary John King this coming fall. While a state could choose to monitor suspension rates, it also could choose to do the minimum about discipline, including exempt charter schools.

King, like his predecessor Arne Duncan, is not likely to hold charters' feet to the fire on segregation, high suspension rates, or their treatment of students with disabilities. King himself is a former charter operator. In 1999, he co-founded one of Boston’s first charter schools, Roxbury Prep, a so-called “no-excuses” charter which had a 60% suspension rate in 2012, highest in the state.