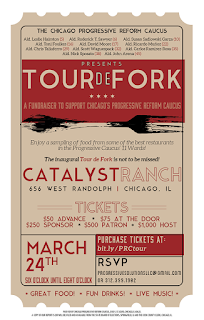 The Progressive Caucus Tour de Fork fundraiser last night at the kitschy Catalyst Ranch in the West Loop was an impressive event, catered by restaurants from some of the 11 wards represented by Caucus members. But the large, spirited gathering was much more than a gastronomic success. It also signified the sea change taking place in city, state and national political alignments, thanks mainly to the emergence of Gov. Rauner as our own local version of Donald Trump.

There are now 11 caucus members, instead of 8 a year ago. This growth is testimony not only to the progressive movement's recent election victories out in the wards, but to the rapid and near-total collapse of Rahm Emanuel's political machinery and personal credibility.

In the wake of the school closings and the Laquan McDonald scandal, the mayor's approval ratings are somewhere down in the 20s, and in the single digits in the black community where voters were largely responsible for Emanuel's previous two election victories over the progressive opposition.

Rahm has lost so much juice that both Democratic Party presidential candidates avoid him like the plague when they campaign in Chicago. Liberal icon Bill Moyers is now calling on Hillary Clinton to press for the resignations of both Rahm Emanuel and DNC Chair Debbie Wasserman-Schultz in order to "do their party and country a service."


And now he’s mayor of Chicago, reelected last April for a second term, but, as historian Rick Pearlstein wrote in The New Yorker a couple of months ago, “Chicagoans — and Democrats nationally — are suffering buyer’s remorse.”

To millions, they are enablers of the one percent, perpetuators of the Washington mentality that the rest of the country has grown to hate. What a message such servants of plutocracy send: Democrats — a bridge to the past.

Just as the Bernie Sanders campaign, combined with the existential threat of Trump presidency, has pushed the Democratic Party's campaign rhetoric leftward, the Rauner-inspired realignment in Illinois has brought some strange bedfellows together here in Chicago around an emerging progressive and pro-labor policy agenda.

Tactical alliances and overlap of interests between the progressives and the council's Black and Hispanic Caucuses could well decide the next mayor's race. Note that yesterday's Black Caucus press conference demanding greater input into the selection of the next police superintendent drew progressive support. Ald. Sawyer plays a leadership role in both caucuses.


I joked with some, standing in the taco line, that I half expected Rauner nemesis Mike Madigan himself to come walking through the door singing "we shall overcome".

The new political alignment in the city and the shifting boundaries around the word "progressive" may cost some Caucus desertions and precipitate new internal struggles within the ranks of union leadership. But it is more likely to liberate some pols held captive on the machine's plantation in the same way the Harold Washington movement liberated them back in the day.

It's the season of the progressives. And that's a good thing. Right?

See Ben Joravsky's latest Reader piece for another view of the realignment.
Posted by Mike Klonsky at 1:03 PM