The view from sunny Florida 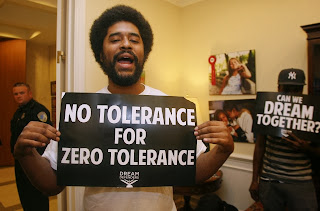 Here's how things look in Broward County where I'm trying to escape the Chicago frost for a few days. American Prospect has the story of the district's attempt to reverse the school-to-prison pipeline.


The new superintendent [former Chicago administrator Robert Runcie] released the data and acknowledged that the problem had a racial dynamic. “It’s a problem all over the country,” Runcie says, “and Broward is no exception.”

The story was also picked up by NYT:


The Florida district, the sixth largest in the nation, was far from an outlier. In the past two decades, schools around the country have seen suspensions, expulsions and arrests for minor nonviolent offenses climb together with the number of police officers stationed at schools.

And then again by the Valley News in sunny New Hampshire where it's -18 deg.


“A knee-jerk reaction for minor offenses, suspending and expelling students, this is not the business we should be in,” Broward Superintendent Robert W. Runcie told the Times. “We are not accepting that we need to have hundreds of students getting arrested and getting records that impact their lifelong chances to get a job, go into the military, get financial aid.”