PISA -- The World Cup of Testing 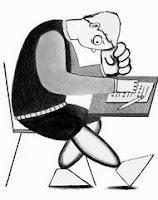 It's that time again -- the silly season when the countries of the world have their schools rated on the basis of the PISA tests. It's like the World Cup of standardized testing. And like the World Cup, the U.S. continues to wind up in the middle of the pack, somewhere behind Ireland and Poland. Look for a new round of racial theories about Asians being smarter, and lots pissing and moaning about "failing schools" and "bad teachers" and the need for more privatization of public ed.

While it's premature to draw any deep conclusions from the latest round of PISA testing, I think I can safely predict that once again the scores will show that wealthy and well-resourced U.S. schools scores right at the top of the heap while the poorer resource-starved ones score right around the bottom.

“The United States’ standings haven’t improved dramatically because we as a nation haven’t addressed the main cause of our mediocre PISA performance – the effects of poverty on students, says NEA Pres. Dennis Van Roekel.


“Our students from well-to-do families have consistently done well on the PISA assessments. For students who live in poverty, however, it’s a different story. Socioeconomic factors influence students’ performance in the United States more than they do in all but few of the other PISA countries.

“It’s time for our nation to face up to that challenge, and we must start by acknowledging that the effects of poverty are pervasive. Children can’t learn in school if they lack nutritious food, a safe place to sleep or access to health care, and our society must address those needs.

So far, so good for Van Roekel. But then he closes out with an ode to Common Core Standards which he hails as "a step in the right direction" and a "game changer." But DVR never says how Common Core with it's even bigger testing and teaching-to-the-test regimen is making a difference in the lives of the growing number of students living in poverty. That's because it can't and the disparity in the all-important test scores, the great gate keeper, will remain. And the union being in bed with the administration and the power philanthropists on this, can only hurt the cause.

Who's number-one in the world this year? It's Shanghai. Hey wait, Shanghai is a city, not a country. How did China swing that? Tom Loveless of the Brookings Institute writes:


For one thing, China as a whole does not take the PISA test. Shanghai is a city, not the nation. It is a huge city, to be sure, but it is not typical of the nation. Other provinces take PISA, but China has an unusual arrangement with the OECD (which administers the tests) by which the Chinese government is allowed to review the test scores and decide which provinces will release their scores. -- Diane Ravitch Blog

Loveless points out that Shanghai with its concentrated wealth, has historically attracted the nation’s elites. About 84 percent of Shanghai high school graduates go to college, compared to 24 percent nationally. Shanghai’s per capita GDP is more than twice that of China as a whole.

EPI's Rich Rothstein and Martin Carnoy respond to Arne Duncan and the D.O.E.'s "manipulation" of the PISA results. Duncan has already proclaimed the results, a "picture of educational stagnation."


Today, threats to the nation’s future prosperity come much less from flaws in our education system than from insufficiently stimulative fiscal policies which tolerate excessive unemployment, wasting much of the education our young people have acquired; an outdated infrastructure: regulatory and tax policies that reward speculation more than productivity; an over-extended military; declining public investment in research and innovation; a wasteful and inefficient health care system; and the fact that typical workers and their families, no matter how well educated, do not share in the fruits of productivity growth as they once did. The best education system we can imagine can’t succeed if we ignore these other problems.

I wonder what would happen if we matched up Shanghai with Winnetka in the World Cup of testing?