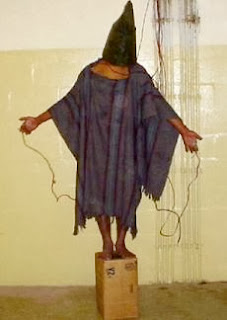 Thanks to reader Dienne (see comment below) for pointing out the role played by KIPP guru Seligman in developing interrogation techniques used on the prisoners at Guantanamo. While Seligman denies working for the SERE Program or directly for the CIA (he was granted a $31-million no-bid Army contract to provide “resilience training” to US soldiers), his own experiments, using electric shocks on caged dogs, heavily influenced the Bush Administration's use of torture techniques.

First read this from the Times story on KIPP:


Toll and Levin are influenced by the writings of a psychology professor from the University of Pennsylvania named Martin Seligman, the author of a series of books about positive psychology. Seligman, one of the first modern psychologists to study happiness, promotes a technique he calls learned optimism, and Toll and Levin consider it an essential part of the attitude they are trying to instill in their students. Last year, a graduate student of Seligman’s named Angela Duckworth published with Seligman a research paper that demonstrated a guiding principle of these charter schools: in many situations, attitude is just as important as ability.

And by "attitude" they mean...

Then there's this from Wikipedia's page on Enhanced Interrogation Techniques like the SERE Program at GITMO:


The psychologists relied heavily on experiments done by American psychologist Martin Seligman in the 1970s on learned helplessness. In these experiments caged dogs were exposed to severe electric shocks in a random way in order to completely break their will to resist. Mitchell and Jessen applied this idea to the interrogation of Abu Zubaydah.[39][50] Many of the interrogation techniques used in the SERE program, including waterboarding, cold cell, long-time standing, and sleep deprivation were previously considered illegal under U.S. and international law and treaties at the time of Abu Zubaydah's capture.

KIPP founder Levin says he considers Duckworth’s work an indication of the practical side of the “character” education he and Toll and Atkins are engaged in.

The sad part of all this is that some parents believe that this type of behavior mod is just what their kids need to straighten them out. KIPP's well-heeled corporate backers also believe these techniques are just the medicine for poor black and Latino children. Not for their own kids, of course.

Seligman, described as politically conservative by a psychologist who knows him well, once threatened his fellow academics who, he claimed, were “forgetting” 9/11.


“It takes a bomb in the office of some academics to make them realize that their most basic values are now threatened, and some of my good friends and colleagues on the Edge seem to have forgotten 9/11,”

In that post, Seligman was arguing that any science advisor to the president “needs to help direct natural science and social science toward winning our war against terrorism.”

I'd like to get our dog Millie, to bite Seligman on the ass. But alas, she's too mellow. I hope Seligman hasn't gotten to her.