Just how much abuse will we accept?

Find out just what any people will quietly submit to and you have the exact measure of the injustice and wrong which will be imposed on them. -- Frederick Douglass

If the great Illinois pension robbery holds up in the courts, many career teachers and other public workers stand to lose upwards of $200,000 in retirement income over the next decade or so as their cost-of-living adjustments are capped. This is not money that was being "given" to them as a gift. It's money that we have contributed to our own retirement accounts and money that was contractually promised us and Constitutionally protected by the state. It is also, the only money teachers get when they retire. They are excluded from Social Security. 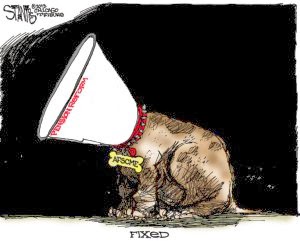 If Tuesday's vote wasn't bad enough, it was followed by this degrading cartoon in yesterday's Tribune, portraying us and the union as a castrated dog. Just how much more abuse will teachers and public employees receive? The exact amount they will accept, said Douglass.


I don't think anything I've seen in this fight has horrified me more. The depiction of union workers who lost the pension fight as neutered dogs recalls propaganda of Goebbels and the lynching of black men in the south. Please decide to comment on the Tribune site, and share with others. Fred Klonsky's blog is the best response I've seen.

In case you are taking names, which we damn well better be, here's the list of who voted how.In the House.  In the Senate.

I'm interested to see how the state's union leaders will respond to the great pension robbery. Gov. Quinn, who will likely sign the new bill into law today, claims that he was "put on earth" to engineer the pension heist. I'm hoping he, and other sellout Dems won't be rewarded for their despicable actions. SEIU, formerly Quinn's biggest supporter, sent members an email Tuesday reminding them that a "yes" vote on pension reform "means a 'no' vote on Election Day,"

According to the San Francisco Chronicle:


The single biggest contributor to Quinn's war chest, the Service Employees International Union, told The Associated Press that there could be "two big strikes" against endorsing Quinn for governor in November. Besides Quinn's support for the $160 billion savings plan, he also has been under fire from the union for considering signing legislation that would alter the pensions of Chicago Park District employees. Quinn is expected to sign state pension legislation early as Thursday in quiet ceremony, a nod to the political sensitivity of the issue affecting employees across the state.

The Worst Pol in the World Award may go to Senate President Cullerton who endorsed the bill even while calling it "unconstitutional." The Sun-Times reports that Cullerton is having "serious heartburn" over the vote. Poor him.

Thanks to Senator Willie Delgado who condemned the bill as “morally wrong, morally corrupt” legislation that will “punish retired teachers, the janitor, the woman who serves lunch to your child in school.”

Kudos also to Lt. Gov. Sheila Simon, who has refused to run with Quinn for a second term, and who openly split with him on the pension bill, which she says, "puts too much of the burden on lower income workers and retirees." Simon is instead running for State Comptroller. She's the daughter of late U.S. Senator Paul Simon.

This from Counter Punch:


Cook County Board President Toni Preckwinkle — a Democrat whose county houses Chicago and its suburbs and employs 20,000 workers in the system’s jails, public hospitals and other frontline agencies — says she may use the bill as a template for her upcoming raid on Cook County’s pension fund. Chicago Mayor 1%, Rahm Emanuel — who jammed through NAFTA for Bill Clinton and derailed the public option in Obama’s insurance company bailout scheme — is also a big fan.