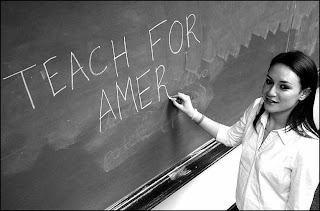 Teach For America (TFA) which has been used as a wedge against higher paid, veteran teachers in mainly  urban district for years, is now feeling the layoff pinch themselves, according to NBC News Philly..


According to [Isha] Lee, during the 2012 school year, TFAGP had 115 total teachers in Philadelphia. That's down nearly 46 percent compared to a corps size of 252 in school year 2011. And in 2012, only 20 of the 115 corps members were in placed SDP schools; the rest were placed in charter schools. When the district laid off 676 of its teachers last month, all but two of the 20 TFAGP corps members in SDP were included in that number.

TFA claims some growth in Mississippi, according to a report in the Clarion-Ledger.


Despite large or long-term TFA presences, overall results are still poor in many districts, including Hazlehurst, Holmes County and Greenville. Nationally, some research shows that Teach for America’s members do at least as well as other teachers. But critics say one of the biggest drawbacks is they’re likely to be gone after two years.

It costs TFA about $41,000 over two years to recruit and train a teacher in Mississippi. State taxpayers put up about 60 percent of TFA’s budget here each year. Though some states give public money, Nurnberg said Mississippi’s public share is unusually high. He attributes that to a shallow pool of wealth in Mississippi. The next largest donor to TFA in Mississippi is Arkansas’ Walton Family Foundation.

Non-Profit Quarterly reports that Minnesota hasn’t been all that welcoming to TFA. In May, Minnesota governor Mark Dayton vetoed a $1.5 million TFA earmark in the state budget.


Despite the Waltons’ all-in support, TFA seems to be facing some pushback. One cause is that the short training period results in TFA’s least experienced teachers being placed in classrooms in desperately need of teachers with experience and solid educational training. Another is that in the places where most TFA candidates want to work, there really aren’t teacher shortages, resulting in low-paid, non-union TFA people replacing higher-paid unionized teachers.

Teach for America has been a sacred cow of social enterprise ever since founder Wendy Kopp got the nonprofit going and added Laura Bush as the honorary chair of the TFA board when George W. Bush was elected president. Are we seeing some nonprofit and community leaders becoming willing to challenge this favorite of education reformers?

I wasn't able to attend last weekend's summit meeting of TFA alums at the Free Minds, Free People conference, and am anxiously awaiting a report.

The Atlantic Wire carried a story, "Meet the Teach for America Resistance Movement That's Growing From Within", leading up to the meeting of alumni  who have become outspoken critics of the organization. The anti-TFA summit was also the topic of an earlier piece in American Prospect, "Teach for America's Civil War" and in the Washington Post.

Email ThisBlogThis!Share to TwitterShare to FacebookShare to Pinterest
Labels: TFA