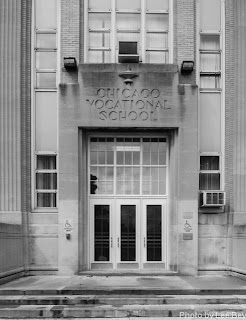 Architecture writer Lee Bey has been following the various phases of reform and restructuring over the years at Chicago Vocational Career Academy. Now, he reports, a significant portion of CVCA, an architecturally-important building that is the city's second-largest public school, would be demolished as part of a $42 million bid to turn the structure into a tech academy.


The PBC on Monday issued a request for qualifications seeking contractors who can handle the three-phase overhaul of the former Chicago Vocational High School at 2100 E. 87th St.  When the dust clears, the school would become a six-year school with a curriculum focusing on science, technology, engineering and math.

Here's something I posted back in May, 2012 about the history of reform at Chicago Vocational in response to an earlier piece by Bey.


CVS was the first high school that joined the Small Schools Workshop back in the early 1990s. With nearly 4,000 students at that time, teachers and administrators were looking for ways to break through big-school anonymity, create a safer learning environment, and break down the wall between academic and vocational learning embeded in the old voc-ed model. After some initial successes, the project was lost to the district's shift to a test-prep regimen under Paul Vallas' regime.