I'm trying to catch up this summer on reading that's piling up in the Kindle. Aside from beach novels -- I've reloaded The Ninth Wave by Eugene Burdick, a favorite from my ill-spent youth in L.A.. Burdick also authored popular '60s reads, The Ugly American and Fail Safe --  I'm trying to get to the serious stuff.

On top of the new pile is Charter Schools and the Corporate Makeover of Public Education: What's at Stake? by Michelle Fine and Michael Fabricant. It came out a year ago but I'm just getting to it. I try and keep up with everything Michelle writes but it's an impossible task -- she's prolific.

Sports writer supreme, Dave Zirin wrote this great piece, Rahm Emanuel's Zombie Pigs vs. Chicago's Angry Birds, in The Nation, back in May. Just got to it. It's a take-down of Rahm's insane plan to build a new basketball stadium for DePaul, which fellow sports writer Rick Telander calls, "a new arena of stupidity," with millions in tax payer dollars -- money that could be used to save our schools.

Chicago teacher  Greg Michie, author of We Don't Need Another Hero and Holler if you hear me,  has a strong response today to Rahm and Byrd-Bennett's "students-first" mantra.


What's happening in Chicago schools -- and in many other places across the country -- is not about putting students first. It's agendas first. Ideology first. Test scores first. Efficiency first...It all can be so discouraging. What provides a measure of hope, though, in places like Chicago and Philadelphia and Seattle and many others, is that so many teachers, parents, students, and community activists are refusing to simply accept this misguided direction for our schools. In increasing numbers, people are speaking up, doing grassroots research, organizing, fighting back. -- Huffington Post 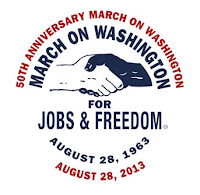 I'm planning to be in D.C. on August 28th for the 50th Anniversary of the historic March on Washington. Hope to see you there.
Posted by Mike Klonsky at 1:17 PM