Testing the limits in Bizarro World

Students didn't suddenly get less intelligent. They were not doing as well in the past as everyone was led to believe. The state had dumbed down the tests and lowered cut scores to avoid sanctions from the federal No Child Left Behind Act. -- Tribune editorial. 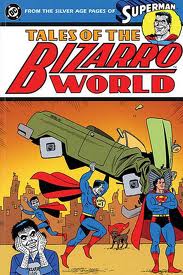 In the Bizarro World that is Chicago's corporate school reform, worse is better. If students score too high on standardized tests, they simply re-norm the tests to push scores downward, causing angry parents and students lots of grief and fear while elating the corporate reformers and school privateers over at the Civic Committee. Then, faced with the data showing that less than half our kids scoring at or above grade level (not the 75% they were claiming a year ago), they turn around and declare how awed they are by the "steady progress" being made (despite that nasty, disruptive teachers strike).


The results will be ugly. Thousands of students statewide who were rated as meeting standards in 2012 will not make the cut in 2013. Teachers, principals and ISBE officials are bracing for a torrent of angry, confused and disappointed parents.

But says Rahm, "these are indicators of where progress is being made on the importance of an education of our children … You want a highly-educated, highly-skilled work force and that’s gonna happen at schools."  Gonna, indeed.

Heiress Robin Steans, who heads the state education policy group Advance Illinois (authors of SB7), but who has no business (no pun intended) being around public schools, says she's “pleasantly surprised” with the results which she called a more honest assessment of children’s progress.

I'm so glad m'lady approves. So does BBB.


“I actually believe this is much better for our children, in the long run it’s going to help our children to be far more successful in getting ready for college,” schools CEO Barbara Byrd-Bennett said of the apparent decrease on a conference call Tuesday.

Ah yes, everything they do is "for our children." That includes closing schools throughout the black community (talk about disruptions) and sending tens of thousands of them across dangerous territory to receiving schools that will become severely overcrowded with swelling class sizes.

Now we learn that according to the latest "revised" test results, that several of the closing schools are making amazing progress, while their receiving schools are sinking like stones.

Of the 48 closing, 23 improved, 23 declined, and one remained the same. The 48th is a high school program whose students don’t take the ISAT.


Some of the biggest gains among the closing schools happened at Bethune Elementary School, which leaped to 38.4 percent meeting or exceeding from an adjusted 22.4 percent.

A few closed schools outpaced their receiving schools, including Morgan Elementary with 34.9 percent meeting or exceeding, compared with 27.9 percent at Ryder. Of the schools chosen to receive those children, 22 increased their scores, 18 decreased and the rest were not available.

Chopin Elementary dropped to 67.4 percent meeting and exceeding from an adjusted 80.9 percent, while students it will take in from Lafayette Elementary improved a bit to 35 percent meeting or exceeding from an adjusted 33.8 percent. And Manierre, which was spared from closing at the last minute, increased to 30 percent while its intended receiving school, Jenner, dropped to 16.6 percent. -- Sun-Times

Remember CEO Byrd-Bennett promising to send "every" student from closing schools to "a school that is academically better:? I do.

Then there's the matter of teacher evaluations which will soon be based disproportionately on student test scores, and will drive teacher "merit" pay.

We can only wait until next year when the negative effects of massive teacher layoffs, overcrowding, increased school violence, and a longer school year with sweltering class rooms come into play. Ah but don't worry. When it becomes politically expedient, manipulating test score data is a relatively simple matter. Scores can be normed up or down as easily and adjusting a thermostat.

Remember how Arne Duncan was able to ride the Chicago "miracle" all the way to the top of the D.O.E.? I do.

But actually, outside the Bizarro World of corporate-style school reform, none of these scores mean a damn thing with regard to what children are actually learning. From the wildest leaps at Bethune to the sudden dips at Chopin, the ups and downs on test scores have little or nothing to do with anything new or different going on in classrooms and lots to do with what's going on outside, in the lives of children and their families.
Posted by Mike Klonsky at 11:12 AM