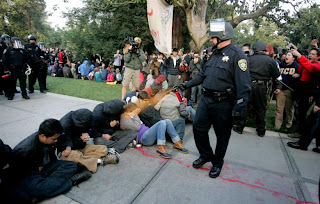 Thousands of local police departments nationwide have been amassing stockpiles of military-style equipment in the name of homeland security, aided by more than $34 billion in federal grants since the Sept. 11, 2001, terrorist attacks, a Daily Beast investigation conducted by the Center for Investigative Reporting has found. Obvious question for Occupiers is, who are these WMDs really pointing at?

Answers could come from Chuck Wexler who runs the govt.-funded Police Executive Research Forum (PERF).  Despite implausible denials here and in this obviously embedded NPR story, it was Wexler who coordinated those conference calls with city police chiefs to discuss their response to the Occupy Wall Street movement last fall. He basically admits PERF'S involvement in this Tweet from Nov. 1

Those conference calls were the prelude to the Oakland attacks on occupiers which led to the wounding of Iraq war vet, Scott Olsen and to the pepper spraying of passive protesters at UC-Davis. Now the cost to those cities is likely to skyrocket as they face lawsuits over free speech, use of force.


******
ABC News reports that anti-govt. anti-taxer Rick Perry's security costs Texas taxpayers up to $400,000 a Month. And he's not even a Chicago alderman.

Ben Falik (really) at Huffington, claims there are some really great deals in Detroit if you want to buy a school.


"What's stopping me from opening my own charter school?" Not much, in all likelihood... You'll want to choose a name for your school that exudes credibility and markets the particular mission of the school. Assuming it's still available, I recommend Academy for Outstanding Achievement in the Field of Excellence.