Every once in a while, a bit of truth comes seeping through the pores of the corporate media. Corporate moguls, media tycoons or politicians become a little remorseful or a little drunk and let us know what they really think. 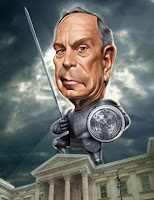 N.Y. Mayor Bloomberg let the cat out of the bag in a recent speech at MIT, admitting that if he were king (isn't he?) he'd fire half the teachers and double class size.


He looked like he was from another planet when he dressed as a hippie for a political show, but the mayor’s blueprint for fixing city schools have some asking “what was he smoking?” -- CBS News

"Big money owns everything ..."
On November 22, Dan Rather upon receiving the prestigious Burton Benjamin Memorial Award at the Waldorf-Astoria in New York City, shared his thoughts on media and the Occupy Movement.

But now, we see our fellow citizens taking to the streets. And, that my friends, is our cue to get back to work. As the People of our nation begin rising up, they expect the business of news to be about inquiry and accountability. And, luckily for us, we can still do that ... but it may not be within the confines of big corporate media. As you know, we are living in an age when big money owns everything ... including the news. -- RSN


“The bigwigs of the corporations knew this, but they figured we’re going to make billions out of it, so who cares? The government is going to bail us out. And the problem loans will be out of here, maybe even overseas.”

Kristof adds:
All this came into sharper focus this week as Bloomberg Markets magazine published a terrific exposé based on lending records it pried out of the Federal Reserve in a lawsuit. It turns out that the Fed provided an astonishing sum to keep banks afloat — $7.8 trillion, equivalent to more than $25,000 per American.

Yes, it's out there. You just have to dig for it and try and make sense out of it.