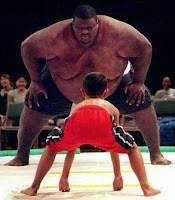 But who's David and who's Goliath?


There's a strange dynamic going on inside the online education reform debate in which the well-funded reformers play the role of wimpy David and the scrappy traditional educators are Goliath. -- Alexander Russo

I've got to hand it to provocateur metaphor-mixing Russo. He got some of my fellow SOSers and current reform critics to take the bait by referring to them as mighty Goliaths overpowering the wimpy Davids of corporate school reform in internet combat.

Russo, a paid blogger for Scholastic, got what he was after -- someone to take notice, stir some controversy  and a hoped-for circulation boost. I have no problem with that. I've worked as a paid writer (beats the hell out of working for free) for several publications myself. But there should be a special place in hell for Russo's patron, Scholastic Inc., if only for their publishing and distribution of coal industry propaganda to the nation's fourth graders.

Speaking of heaven and hell, let me put on my old-testament scholar's cap for a minute (watch closely, you probably won't see this happen again), to take on Russo's misuse and abuse of good- book mythology. Remember, the biblical David's victory in the battle against the Philistines had less to do with size and and shot accuracy than it did with social justice. David stood on just ground, sling-shot in hand against the enemies of God's helpless people. That's hardly a metaphor for Bill Gates' minions.

How does that metaphor play out here? Let's just say it's a stretch (no sling-shot pun intended). Any comparisons between God's king and corporate school reformers like Michelle Rhee, Arne Duncan, and Wendy Kopp come purely from the pipe dreams of a Philistine. In other words -- what is Russo smoking? Neither are today's teachers, parents and community activists helpless wanderers, waiting for a Superman messiah to lead them.

My fellow SOS activist and EdWeek blogger Nancy Flanagan (Teacher in a Strange Land) thanks Russo for "acknowledging a handful of the swelling cadre of articulate educators and parents who are mad as hell about what's happening to their public schools and just not going to take it anymore. We like it when our efforts are noticed and shared."


One at a time, the big-boy funders are picking off nonprofits (not to mention the federal government) and re-shaping their work toward a reformy mindset. A little anti-LIFO here, a bit of merit pay there, a heavily subsidized "innovation charter," the repeated concept that grant funding and privatization are the only routes to genuinely raising the bar. If you want the pay, you have to play. They may have even lured the NEA over for a quick drink with their youngest and hottest teacher recruits.

Anthony Cody (Living in Dialogue), one of the "Goliaths" named in Russo's post, has a different theory.  He thinks that the corporate heavies have a disdain for public debate and carefully choose their arenas so that they can always win.


They are choosing as their forums places where they know they can win. Video surfaced of Stand For Children CEO Jonah Edelman speaking frankly to fellow "reformers" at the Aspen Institute, disclosing exactly how his organization had muscled its way into Illinois, supporting legislation that eroded the ability of teacher unions to negotiate over basic things like the length of the working day, and undermined seniority.

Just to be safe, I consulted with some other of my fellow hermeneutic scholars, some of whom interpret this dust-up as Russo's attempt to egg on his favorite corporate funders to become more active (if you know what I mean) in the internet battle against us reform infidels.

Others interpret Russo as a misunderstood prophet who is actually praising us progressives for our feistyness (yes indeed) and our organization (if only it were true) and telling us, that in the long run, we have the power to overcome and save our schools.