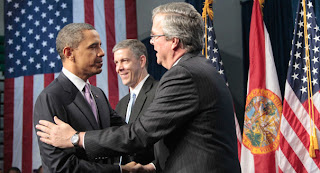 
"President Obama last week proved his point. Education is not a partisan issue. Both Democrats and Republicans are pushing terrible ideas." --Washington Post

Jeb Bush “is someone who championed reform when he was in office, someone who is now championing reform as a private citizen.”-- Politico

"I told him [Pres. Obama] directly that I and so many other teachers were very disappointed to see him on stage with Jeb Bush, considering the assault on public education he has led in this state and how his foundation has continuously tried to eliminate our contracts and our collective bargaining" -- Miami Examiner.com

New definition of reform = who to fire first?


“It is really cynical for the political vultures to make this about a victory against the unions,” said Michelle Fine, a professor at the City University of New York who testified for the plaintiffs as an expert witness in the case. “This is really just about how we distribute the pain. The remedy itself is very sad.”--New York Times


“For the sake of your race, you should sacrifice something of your present comfort for the purpose of being as grand in that respect as the white people,” Lincoln said, promoting his idea of colonization: resettling blacks in foreign countries on the belief that whites and blacks could not coexist in the same nation. -- Sun-Times