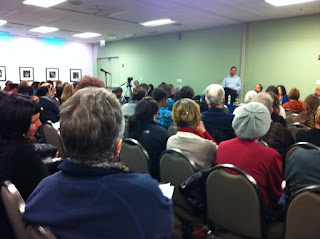 If last night's forum at UIC is any indication, mayor-elect Rahm Emanuel won't have much of a honeymoon, especially when it comes to his role as boss of the public schools. Emanuel's school plan, which sounds a lot like Mayor Daley's and the Civic Committee's Renaissance 2010, was under assault by last night's panelists  before an appreciative, standing-room-only crowd.

The panel was organized in response to a statement on Myths & Realities of Chicago School Reform, written by a group of Chicago researchers called CReaTE (I was one of the signers to the statement). Last night's panel   included some of the city's top ed researchers and academics as well as community and union union activists, parent and student and community organizers.

The main message was, talk is cheap. Let's get organized.
Posted by Mike Klonsky at 10:01 AM