The road to Madison 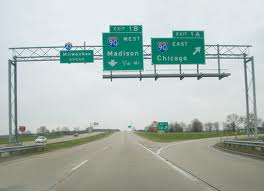 The drive from Chicago up to Madison is about 150-miles, a little over 2 hours each way. Maybe a little longer coming back because of the late afternoon traffic or if you stop for dinner. It's a straight, boring shot up I-90, past Rockford and the Clock Tower Inn, where the Fab 14 Democratic senators have been holding up for the past 23 days. But if you drive it with friends, there's time to catch up on politics and personal stuff. Or just plug in some good sounds, stop at the Oasis for cheaper gas and coffee fill-up. Before you know it you're heading down John Nolen Drive towards the Capitol. You can usually park on the street or in a lot, a block or 2 from the protest march.

I got used to the drive back in the '60s, then again when my daughter was an undergrad at UW. It was also fun making the trek up to Camp Randall for Badger football games when our friend's son was a freshman fullback. Looks like we're headed back up tomorrow to let Gov. Walker and the Koch brothers know what we think about yesterday's fascistic, union-busting coup d'etat.

"You are cowards!" spectators in the Senate gallery screamed as lawmakers voted. Within hours, a crowd of a few hundred protesters inside the Capitol had grown to an estimated 7,000, more than had been in the building at any point during weeks of protests. -- This morning's Detroit Free Press