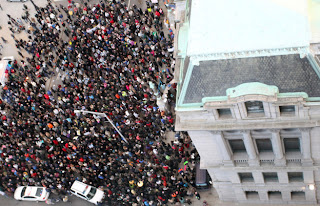 "It's for the kids," say Providence officials


About 1,500 people jammed the street in front of City Hall in Providence, R.I., on Wednesday to protest last week's dismissal of the city's entire teaching force. "I thought the only insanity was in Wisconsin, not in Rhode Island," Randi Weingarten, president of the American Federation of Teachers, told the crowd, which raised signs and banged drums... Providence officials say their goal is to cut the budget while doing the best they can for city schoolchildren.--NPR

It was a year ago that mass teacher firings began in this state, lauded by President Obama and Sec. Duncan.


Assault on teachers continues in Idaho

State schools superintendent Tom Luna said Wednesday that his bill to eliminate 770 teaching positions to pay for expanded technology in the classroom — and fill a public education funding hole — still has life. “The reports of the death of that bill have been greatly exaggerated,” Luna told a group of reporters at a lunchtime press conference in Boise.-- Press Tribune

Reform?
Whenever you see the words, OBAMA, JEB BUSH, and SCHOOL REFORM together in one headline, DUCK KIDS!


“Because of high expectations for students, hard-edge policies that focus schools on learning and an array of choices for families, the Sunshine State is leading the nation in rising student achievement,” Bush said. “I look forward to sharing Florida’s model for student success with President Obama and Secretary Duncan.” -- Political Wires