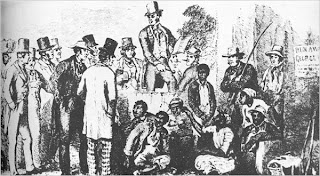 The National Mall was once the site of a slave market
I couldn't go to the inauguration. Have to teach next week. Family and friends are there in my stead. However, I'm still drawing inspiration from the grand event and the decades of struggle that led up to it. Here's some of it:

"A Civil Rights Victory Party on the Mall" (NYT)

Representative James E. Clyburn, a South Carolina Democrat who grew up under Jim Crow laws, said he had more than 11,000 requests for his 193 tickets and he gave most of them to people who had fought for civil rights. Mr. Clyburn reserved tickets for a constituent, Lillian Martin, 73, who was determined to go despite having terminal cancer and regardless of whether she had a ticket.

Mrs. Martin died a few days ago. But her husband plans to go in her honor. In an interview shortly before she died, Mrs. Martin said her cancer was “growing by leaps and bounds but it can’t overtake me — there’s too much I’m looking forward to with the inauguration of a black president.”

From a story about the Gates Millennium Scholars Program at marinij.com

During the 2008 Iowa Caucus, I was in Cuba. Cuban television broadcasted the Caucus results. When the station signed off for the night, there was a freeze frame screensaver of Obama with his supporters and the caption "Obama wins Iowa."This screen remained on all night. It struck me that the world was watching and hoping that change would come to the U.S.

From my observation, there is a generation eagerly preparing themselves and waiting to take the baton and answer Obama's "call to service."W.E.B. Du Bois may have expressed it best when he said: "There is in this world no such force as the force of a person determined to rise. The human soul cannot be permanently chained."