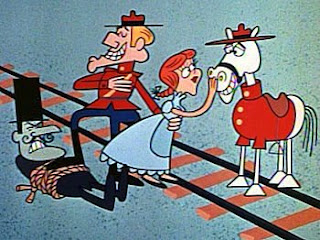 Canada is now rivaling the state of Nebraska for the title of world's intellectual laughing stock. When UIC's Distinguished Professor of Education and author, Bill Ayers landed in Toronto to speak at a university conference, Dudley Do-Right and the RCMP quickly mobilized, funny hats and all, and turned him back at the border. They were obviously afraid that their U of T students would rise up in rebellion against them and stage an armed revolt against dull campus life, at just the sight of Bill?

[Jeffery] Kugler [executive director of the Centre for Urban Schooling at the Ontario Institute for Studies in Education at the University of Toronto] said the Centre for Urban Schooling was left scrambling to cancel a busy day of appointments for Ayers. He had been scheduled to deliver a lecture at an inner-city teacher education program, to speak with principals and senior staff from the Toronto District School Board, to visit a classroom and to talk with community youth workers. Later, radio and television interviews were scheduled, followed by an evening lecture.

But NYT flat-worlder Tom Friedman has a completely different take on Ayers: