I thought McCain lost the election 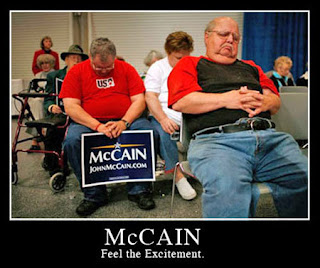 Then why does he get a seat on the Senate's powerful HELP Committee that includes (E) control of the education agenda? Answer, according to pal Lindsey Graham--"He wants to be a player."

The HLP part stands for health (he's against it), labor (he's against it) and pensions (against). I mean, he had nothing to say on the subject of public education all the way through the campaign, even with all that Gates Ed in '08 money floating around. He was too smart to make an issue of his bent towards teaching creationism. He left his pro-voucher politics at home as well. But now that the elections are over and everyone's reaching across the aisle, John McCain, with the EEP No Excuses crowd behind him, intends to be the main voice for more testing and less money for schools.

For a guy who barely ever mentioned schools on the campaign trail and included a program already in law as a key part of his pre-K plan, McCain has been surprisingly visible on education issues lately.

Email ThisBlogThis!Share to TwitterShare to FacebookShare to Pinterest
Labels: McCain