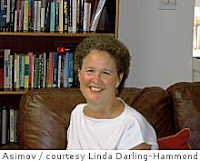 Newsweek continues the sham of equating reform with privatization and anti-unionism. Their main target, of all people—Linda Darling-Hammond.

Reformers view Darling-Hammond as "anti-accountability" because she is a critic of standardized testing and teachers' performance pay being linked to test scores. She has been very critical of Teach for America, the organization that sends thousands of recent college grads into inner-city schools each year. Darling-Hammond has argued that the answer is not to bring young, eager and untrained teachers into classrooms, but rather to better train the teachers already there.

But at least one reformer—me-- thinks LDH would make a great Sec. of Ed precisely for the reasons above.

S.F. Chronicle says Darling-Hammond's job now, is to head the team that will gather ideas about how to turn Obama’s education ideas into legislation. She dismissed the idea that such plans are pipe dreams in the current economy.

"This is decimal dust in the federal budget," she said. The $29 billion Obama wants to add for education "is less than 10 percent of the weapons cost-overrun announced last summer," she said. "It's less than 1 percent of what the bailout is anticipated to cost."