The inevitable "total failure" of reform 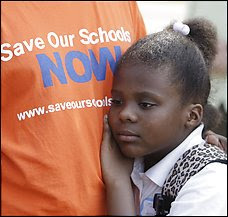 I've spent the last two days in a typical, large, comprehensive, mid-western high school working with teams of teachers on differentiated instruction. They seemed anxious to pick up skills for dealing with the wide range of student learning styles, levels of abilities and interests. They also seem to enjoy having some dedicated time together with their colleagues, trying out different strategies and tuning their plans. Mostly they like talking about their students with other members of their team and figuring out how to reach even the most resistant among them.

But the situation, as usual, cries out for structural change, beyond the immediate scope of classroom teaching and professional development strategies. The results were that most teachers were glum about the prospects of really using DI, given constraints of classroom size and a test-prep culture that doesn't reward or otherwise encourage personalization or project-based learning.

Their high schools are too big and badly organized. This isn't an excuse but their daily reality. Teachers don't have adequate time to meet, plan or collaborate and little time to reflect or think about the needs (many of which arise from conditions born outside of school) of every one of the 150 or so students that come in front of them each day.

One major problem is, the pendulum is swinging back away from the structural and cultural reforms, many of which have positively impacted high school teaching and school change during this past decade. The inevitable failure of top-down reform plus the fact that no single reform or structural change is the magic bullet it is often cracked up to be, usually leads to the abandonment of every hopeful reform strategy by the mega-foundations, before they have had a chance to be fairly evaluated.

This in turn, brings that inevitable smug, "I told you so" response from cynical traditionalists or the conservative think-tankers who could have told us all along that public schools were un-reformable and that the only solution is privatization, teacher firings, school closings, union busting, or even more draconian measures imposed on schools from the outside.

The recent negative presidential-campaign-inspired verdict on the Chicago Annenberg Challenge, which has been written off as a "total failure" because of its minimal impact on standardized test scores, was a case in point. Another example was the way that the Gates Foundation seemed to be retreating from its small-schools initiative on the grounds that small schools weren't the panacea they originally thought them to be. (See Diane Ravitch's I-told-you-so commentary on behalf of the right-wing Hoover Institute, on Gates' reversal).

But nearly all these current reforms as well as their reversals have come from the top-down and have left out the very teachers who are charged with implementation and who ultimately get blamed for the failure of badly conceived reform initiatives that always seem to be done too them, rather that with them or by them.

More thoughts about the inevitable failure of top-down reform in coming posts.
Posted by Mike Klonsky at 12:55 AM

Email ThisBlogThis!Share to TwitterShare to FacebookShare to Pinterest
Labels: schoolreform