The fall of Chancellor Wise 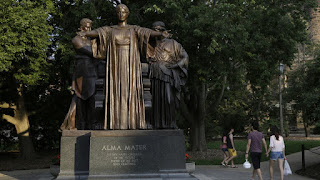 Asked if she was taking the fall for the Board of Trustees, Wise said, “no,” she was sharing the responsibility. -- Illinois Public Media, September 04, 2014

Phyllis Wise has been forced to resign from her $549,069/yr. job as University of Illinois Chancellor. I say, good riddance to you Chancellor Wise and may the rest of the Board of Trustees go with you. You have helped disgrace the name of a once-great state university system and made me ashamed to call it my alma mater. I received both my masters and Ph.D. from UIC.

Wise takes the fall but it was the Board of Trustees that violated the basic principles of academic freedom and the First Amendment when they rescinded their job offer to professor Steven Salaita over his controversial posts (critical of Israel's attack on Gaza) on Twitter. Rather than stick up for principle, the cowardly chancellor and trustees caved under pressure from a handful of wealthy and powerful donors who threatened to withhold their contributions if Salaita was hired.

This of course, is not the first time the U of I trustees have violated the rights of faculty members and the principles of academic freedom. I'm thinking back to 2010 when my friend and UIC colleague Bill Ayers was denied emeritus status by Board Chairman Christopher Kennedy who was bitter about an obscure controversial passage referring to the Kennedy assassination in a book Bill co-authored back in 1974.

But now the publicly-funded state university faces even greater losses of credibility and money with a barrage of suits being filed by Salaita, the ACLU and others.The Salaita firing has also led to boycotts by academics, who refused to visit the campus for conferences and criticism from some brave souls who are members of the university’s own faculty and student body. A letter protesting Salaita's firing, signed by dozens of Jewish U of I students and faculty members, was ignored by Wise and the trustees last September.

The American Association of University Professors voted earlier this year to censure the university.

All this not to mention the university's mistreatment of its athletes and its racist Chief Illiniwek mascot.


The university also faces financial uncertainty due to the state’s budget crisis. The state has no spending plan for the current fiscal year, leaving public universities uncertain how much money they’ll receive. Gov. Bruce Rauner has proposed cuts as steep as 31 percent. State funding covers about 11 percent of the university’s operating budget.

A judge on Thursday denied most of the university’s request to dismiss the Salaita case.

Steven Salaita not "civil" enough to teach at U of I. But Chief Illiniwek OK. #Civility pic.twitter.com/qDBV0j7mMi
— Mike Klonsky (@mikeklonsky) September 3, 2014