In response to the Katrina model of 'reform' 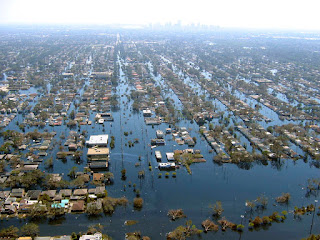 Again, just to be clear and for the record: if the RSD were judged by the same standards used to take control of schools in New Orleans 10 years ago, the RSD would be left with only four schools. -- New Orleans Tribune editorial

A decade has gone by since the disaster that was Hurricane Katrina ravaged the Gulf Coast and in particular the city of New Orleans. Ten years is plenty of time to make an assessment of the so-called "reforms" that were not only imposed on the people of New Orleans, but which became the prototype, the model if you will, for the top-down remake, not only of  urban public education, but of American cities as well. In previous posts, I have called this the white-inizing of the cities, ie. an exodus of 250,00 African-Americans from Chicago in the past decade. But it is so much more than that.

As the anniversary of Katrina approaches and the 2016 presidential election nears, the forces behind the Katrina reform model are coming out in the open and calling for it's expansion and implementation in cities like Detroit, Chicago, D.C....everywhere. Last week's piece, "Chicago, New Orleans, and rebirth", by Chicago Tribune editorial board member, Kristen McQueary  opened the floodgates (no pun intended) for the coming wave of disinformation and the big lie (undocumented) about the "success" of reform in New Orleans. She goes so far as to wish a disaster of Katrina proportions on Chicago as a reform strategy. Her follow-up non-apology,  "Hurricane Katrina and what was in my heart" was even worse.

Then came this vile piece of death culture from the Reader's Michael Miner. Brother Fred takes it on here.

This morning, I read a powerful response to the faux reformers [h/t Deb Meier]. It's an editorial in the New Orleans Tribune, "For the Record: You Ain't Done a Thing" which deconstructs N.O. so-called "reform" brick by brick.

If you want to understand the real deal on post-Katrina reform, read the entire piece.