Claypool's Plan B is same as Plan A -- Pension theft. Time for Plan C. 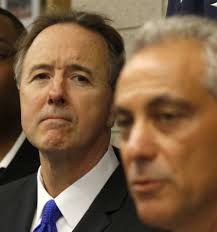 Rahm's latest (3rd in 2 years) hand-picked school boss Forrest Claypool, claims he has no "Plan B" for balancing the city's un-balanceable budget, should "pension reform" fail. Forrest can't see the forest for the trees -- pension reform theft has already failed.

When mayoral candidate Chuy Garcia said he had no budget cure-all, the press ran wild with it --called his plan, "squishy" -- and it helped cost him the election.

But when the fixer-in-chief admits he has no fix beyond unconstitutional pension theft there's barely a Tweet.

Claypool, put in charge of CPS last month by Mayor Rahm Emanuel, also said teachers have to do their part by picking up the full cost of their pension contributions if lawmakers don't use Emanuel's preferred option of combining city and state teacher pension funds.

Jackson Potter, a CTU officer, said eliminating the pension pickup practice would amount to a pay cut and violate a long-standing agreement with teachers.

Potter is right. The pension pickup was offered to teachers in lieu of a pay increase as part of the district's contract negotiations. A contract is a contract and pensions are a promise, written into the State Constitution. So ruled the courts.

With no Plan B, look for class sizes to rise dramatically during the second semester and as hundreds of more teachers are pink-slipped. Look also for Claypool to import dozens more 5-week-wonder TFAers to replace the hundreds of special ed teachers and staff now threatened with firing.

Actually, when you see the mayor rapidly expanding his TIF districts, which take million of dollars directly out of the schools, you begin to wonder if there's really a crisis after all.

Time for Claypool to go to Plan C.
Posted by Mike Klonsky at 3:08 PM