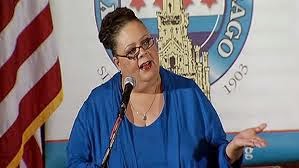 A good sign for Karen Lewis. She's already got them nervous.

No sooner had she hinted that she was "seriously considering" a run for mayor than Greg Hinz at Crain's jumped out with a patronizing, borderline racist column, warning Lewis to rethink the prospect. If Hinz's column is any indicator, just the thought of her running has got the one-percenters' shorts in a twist.

I say, borderline racist (trying to be kind) because Hinz  portrays Lewis as the stereotypical angry black woman who "needs to dial down her public persona" and who he finds "too quick to reduce every dispute to racial terms," which Hinz calls "dangerous grounds."

Every dispute -- really, Hinz? You mean like her defense of retiree pensions? You mean like adequate funding and against the privatization of public schools? You mean like opposition to Rahm's school closings or his give-away of precious lakefront city land to billionaires? You mean like her talk before the City Club, where she called for a "LaSalle Street tax" to help get us out from under the so-called pension crisis (which is really a revenue crisis)? Racial, Mr. Hinz? Perhaps you can give us even one example of a dispute that Lewis "reduced to racial terms."

Or maybe Hinz is the one who needs to dial it down a notch.

By now we should all know what Hinz really considers dangerous grounds. He finally comes clean a sentence later.


I also find her proposed solutions to the city's fiscal woes to be far too focused on squeezing the well-off ...

Exactly. He should have just said that in the first place.

That tone-it-down stuff has a familiar ring to it, doesn't it. No, I'm not just talking about way back in the day when the Eddies (Vrdolyak and Burke) were leading the "anybody but..." campaign against Harold Washington, who went on to become the city's first black mayor. I'm thinking more about the steady tone-it-down media drumbeat, warning Lewis and the rest of the city's progressives to quiet down. Remember last-month's Sun-Times "tone it down" editorial? I sure do.

Then Hinz tries to patronize Lewis, conceding that she is "a bright, sophisticated, erudite woman, with a side few voters have seen". Well, yeah, Hinz. I know this may shock you, but thousands have seen it. She is after all, a SCIENCE TEACHER. Hinz goes on to admit that Lewis, "has done a terrific job in uniting her union, getting a much better deal in the 2012 contract than business reformers wanted." I say admit, because it was just about a year ago when Hinz was dissing the CTU leader for being a poor negotiator and putting the onus on her, rather than on Rahm for the closing of 50 neighborhood schools and for the massive teacher lay-offs that have followed.

We should thank Greg Hinz and Crain's for tipping the hand of the 1%-ers. Now we know what their angry-black-woman line of attack will be, should Lewis dare to enter the lion's den of mayoral politics. Not bean bag to be sure. But knowing Karen Lewis, I don't think Hinz's dangerous grounds warning is going to intimidate her or dissuade her from taking on the Little Emperor who now sits unchallenged on the 5th floor of City Hall.

My advice to Karen, for what it's worth -- Don't dial it down. Crank it up. There's lots of support out here for you and for your vision of Chicago, should you decide to run.