Who will stand up for Public Education in this election?

Romney lands the first punch. Will Dems strike back? If not, who will?

In the run-up to the elections, neither candidate(s) has said much about education issues. As for party platforms, neither party has a real education plank. The Republicans have been playing only two notes -- bust the teacher unions and don't tax the rich. The Democrats have been playing none. They have been tight-roping between the teacher unions and the influential hedge-fund "reformers" like Democrats For Educational Reform (DFER) and have seemingly decided to play it safe and go without an education plank. Neither party dares to utter the words No Child Left Behind or Race To The Top which are both vote killers for any candidate. 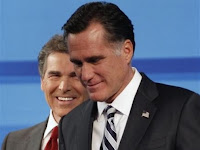 But today it was a clever Mitt Romney who fired the first salvo across the bow of the reticent Dems. Speaking before a friendly crowd at the U.S. Chamber of Commerce, Romney co-opted much of the Democrats ed "reform" initiative, launched a broadside against the unions, etch-a-sketched on his former support for NCLB, and called for a national system of school vouchers for private schools.


"This president receives the lion's share of funding from organized labor, and the teachers' unions represent a massive source of funding for the Democratic Party," Romney said.    He continued, "If I'm president of the United States, instead of just giving lip service to improving our schools, I will actually put the kids first and the union behind in giving our kids better teachers, better options and better choices for a better future."

Romney's speech puts the ball squarely in Obama's court. In what appears to be an extremely close race, public school parents and three million union teachers, most of whom are Democratic voters,  could make the difference. But until now, the president's reform agenda, led by Ed Sec Arne Duncan, has been almost equally anti-teachers union and eerily similar to that of the neocons who preceded him. It's an agenda that so far has generated little if any enthusiasm among teachers and ed activists at the grass-roots level. And without that enthusiasm, a la 2008, it's doubtful Obama can win, or even if he does, carry congressional candidates with him.

Romney's open embrace of vouchers is a bone thrown to energize the far right wing of his party and would seemingly give Obama room to distinguish himself from Romney. The problem is, his DFER patrons have no problem with vouchers, and echo or even outdo Romney's anti-labor rhetoric. With the NEA and AFT vote already locked up, the Democrats have no need to take Romney on regarding collective bargaining rights or issues like test-based teacher evaluation, smaller class size, mass firings, or school closings. And on privatization issues, such as replacing charter schools with private ones, Obama and Duncan are marching in lock-step with the Republicans.

Romney also officially announced his appointment of his education team, led by former Bush Ed Secretary Rod Paige.  Paige, you may recall, distinguished himself by calling the teacher unions "terrorists" and calling for more Christian religious teaching, including the teaching of  "intelligent design"  in public schools. He also engineered the phony "Texas Miracle" while Superintendent of the Houstonools. Along with Paige, Romney's list of education advisers reads like a who's- who of Bush-era, corporate-style education reform and school re-segregation.

So the question is, where will the pressure from below come from to make public education issues front-burner? Save Our Schools (SOS), which organized last summer's march and rally of thousands of teachers, is trying to organize a national discussion and develop a national platform. With few resources and a late start,SOS  is trying to pull together a People's Platform Convention in D.C. in August with such notables as Jonathan Kozol, Deborah Meier, and Nancy Carlson-Paige heading the speakers list. If they can unite a critical mass around a policy platform, SOS activists and allies could then organize actions and occupations at the upcoming conventions and hopefully provide a voice for teachers and public school advocates.

But to do so successfully, the fledgling  organization will have to raise some big money fast. A presidential election year is the most difficult time to try to raise money. And it's a daunting task to pull together locally-based activists around such a national project.

You can register for the SOS Convention or make a contribution here.