Daley strikes back with poke at longer school day 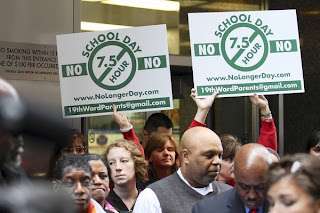 The growing rift between Rahm Emanuel and former Mayor Daley has begun to surface publicly. Daley is punching back (well, maybe slapping is a better word) at Rahm's longer-school-day initiative.

Lengthening the school day at Chicago public schools is a key part of Mayor Rahm Emanuel’s agenda, but his predecessor doesn’t think it’s the answer to providing a better education. “At first I thought it was, but I don’t think so,” former Mayor Richard M. Daley said in an interview Monday night on WLS-Channel 7 News. “To me, to take a fourth-grader or a sixth-grader or a high school student, and say you’re going to stay more than six hours — we need quality instructions.” -- Sun-Times

That's more than one instruction, in case you missed the malaprop.

Faced with the fact that mayoral control of Chicago schools has brought no real improvement over the past two decades, and asked what if anything would be different in his administration, Rahm came up with the only thing he could -- a 7.5-hour school day, implicitly blaming Daley for past failures.

“It doesn’t bother me,” Daley said. “It’s all part of the rhetoric.”

Daley's people, seeing the growing parent resistance to Rahm's imposition of the longer-school-day, must have figured this as an easy point of counterattack. They're right, of course. As I and others have pointed out over and over again, there's no research to support Rahm's approach.
Posted by Mike Klonsky at 3:35 PM