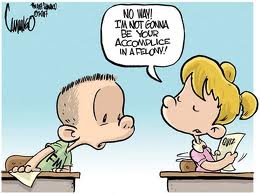 Schooling in the Ownership Society

If they are going to start jailing students for cheating on standardized tests, our prison system will soon swell well beyond its world-leading 2-million inmate population. Since they've made the standardized test score the single most important gateway to college and hoped for financial success, a.k.a the American dream, cheating scandals and become pandemic across the country.

Previous scandals have been reported primarily in urban districts like New York, Atlanta and D.C. The school leaders who have been found at least largely responsible for systemic cheating in their schools have certainly not been arrested. Atlanta former superintendent, Beverly Hall was fired and I have no idea what happened to the 58 principals implicated in the scandal, but none that I know off are in prison. The same could be said about N.Y. Mayor Bloomberg and his crony former chancellor Joel Klein (now working for perhaps the world's greatest cheater, Rupert Murdoch) or of former D.C. school boss, Michelle "Erasurehead" Rhee.

But yesterday it was reported that at least 20 students and former students in upscale Great Neck, N.Y. have been arrested in a SAT/ACT test-taking for hire scandal. Forty students are also being investigated. Makes you wonder how many rich kids have been taking college spots away from students who couldn't afford to hire proxy test takers? And how about those wealthy suburban schools that have no trouble making AYP?

The Sun-Times reports another suburban cheating arrest in Antioch, IL where a special-ed teacher and wife of the high school’s head football coach, charged with computer tampering for allegedly changing the grades of several students, most of whom where athletes.

And on and on it goes. So far the response has been to tighten security around the tests. This sounds like a job for the marines returning from Iraq. They could be put to work either as security guards at test-taking centers or hired as prison guards for hundreds of new student prisoners.

Or we could consider getting rid of the testing madness that turns schools into sorting and tracking machines and  precipitates cheating, and start moving towards more authentic ways of assessing how kids are learning.
Posted by Mike Klonsky at 11:10 AM

Email ThisBlogThis!Share to TwitterShare to FacebookShare to Pinterest
Labels: cheating