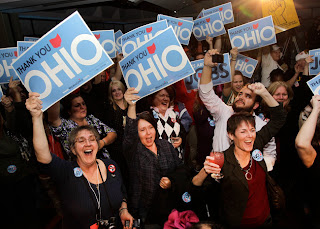 "Ohio voters just gave public school teachers something they haven’t received in a while — respect," writes Valerie Strauss at the Answer Sheet.

Across the country, several other Republican-backed measures were also dealt setbacks, including a crackdown on voting rights in Maine. In Wake County, N.C., voters dealt a blow to the racist Republican clique that had taken over the school board by electing a progressive Democrat and educator, Kevin Hill. In Mississippi, voters rejected an amendment to the State Constitution that would have banned virtually all abortions and some forms of birth control by declaring a fertilized human egg to be a legal person. Michigan voters recalled Rep. Paul Scott who was a front man for T-Party gov, Rick Snyder and a pal of Michelle Rhee. The new law repealed in Ohio would have severely limited the bargaining rights of more than 350,000 teachers, firefighters, police officers and other public employees.

Lots of credit for its defeat goes to the Occupy Movement and the unions for re-framing the current national political debate and turning out the troops. Big losers were the Koch Bros. and other corporate interests who spent millions to pass the union-busting bill.

While the movement is non-partisan and crosses party lines, especially in Ohio, the trend is becoming clearer. The victory in Ohio, like those in Wisconsin, is energizing the labor movement and should help Democrats in 2012. But today's Democratic Party, especially its big-city mayors, appears to be as nervous about the movement as are Republicans. In Chicago, for example, Mayor Emanuel has a similar approach towards unions, teachers and other public employees as Republican governors in Wisconsin, Ohio, Michigan and New Jersey. Until last night, Obama was silent on the events in Ohio.  His achilles heel is his failed education policies which amount to little more than a Bush re-hash of austerity, privatization and mass teacher firings, while using the rhetoric of reform. There needs to be a shake up in the Dept. of Education and a rethinking of anti-teacher and anti-union Race To The Top.

This morning, in what one AP journalist called, "a signal of the issue's national resonance", White House spokesman Jay Carney issued a statement saying President Barack Obama "congratulates the people of Ohio for standing up for workers and defeating efforts to strip away collective bargaining rights, and commends the teachers, firefighters, nurses, police officers and other workers who took a stand to defend those rights."

Remember Mitt Romney visited Ohio recently and said he was not sure where he stood on the issue. A day later, he said he stood against the labor unions and collective bargaining rights for teachers and other public employees. After yesterday's shellacking, Ohio's T-Party Gov. Kasich was contrite and is now claims he will throw his support the state's workers. Here's hoping Pres. Obama is watching all this closely and drawing the appropriate lessons. His road to victory in 2012 should be apparent by now.
Posted by Mike Klonsky at 6:44 AM