Columbia prof, Thomas Edsall writing in today's NY Times, points out that the GOP has become the "white party," armed strategically with a racist, anti-Latino, anti-immigrant election strategy. It's a strategy that worked successfully in the mid-term elections. In the current Republican primary, says Edsall, any Republican candidate that, even momentarily stumbles on this, will pay for it in the polls. Case in point was Rick Perry.


The once-ascendant Perry torpedoed his own bid during a Sept. 22 debate in Orlando, Fla., when he endorsed using taxpayer dollars to educate the children of illegal immigrants. A single sentence started him on a downward slide:

If you say that we should not educate children who have come into our state for no other reason than they’ve been brought there by no fault of their own, I don’t think you have a heart.

Edsall thinks that the major threat to the Republican “white” strategy is a revival of the high turnout among minorities that carried Democrats to victory in 2008. Republicans, however, are taking advantage of their newly won control of state governments across the country to enact laws designed to suppress minority turnout .

I would add an even greater threat is the reticence of Democrats to mobilize their own base and forcefully push for immigration reform. Now that Rahm Emanuel is no longer chief of staff, maybe there's a shot. 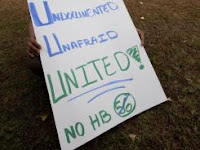 Birmingham Mayor William Bell told Democratic members of Congress at a hearing on Alabama's new immigration law that the legislation smacks of apartheid and Jim Crow laws. Bell told the lawmakers at an ad hoc hearing on Monday that the law passed this year by Alabama's Republican-controlled legislature places financial burdens on cities and could force police officers to employ racial profiling.
******
In an attempt to invoke the memory and passion of the civil rights movement, a group of Democratic lawmakers will stand today in a historic church in Birmingham to help rally opposition to the state's new law that seeks to get tough on illegal immigrants.