All educational Miracle Cures and panaceas are wrong, and many who push them are charlatans—starting with the ubiquitous Michelle Rhee. Schools get better when communities get richer, rarely the other way around. Remember when charter schools and vouchers were going to save the world? There’s no evidence they’ve out-performed public schools. For all the attacks on public school teachers as indolent dolts who are also somehow cunning and effective political operatives, in my experience most work harder and take their responsibilities more seriously than their presumed betters in the editorial suites and CNN talk shows.

Oh, brave new world that has such noble reformers in it. 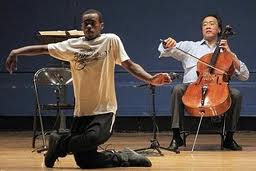 Last month world renown cellist Yo-Yo Ma performed for the school community at Telpochcalli Elementary School in Chicago's Little Village Neighborhood. Ma, the Chicago Symphony Orchestra's creative consultant, and Damian Woetzel, a ballet star/director/producer who serves with the virtuoso cellist on Pres. Obama's Committee on the Arts and the Humanities, gathered a diverse collection of performing artists at the Telpochcalli Elementary School in the predominantly Mexican-American Little Village neighborhood to illustrate the benefits of arts-based education programs.

After the performance, Ma raved about Telpochcalli.


"The school is spreading a fabulous message," he said, noting that teaching two languages helps students see the world from multiple perspectives. "Plus you add the senses, whether it's music, it's dance, collaboration — all these things are the ingredients that stimulate the imagination. Imagination and empathy are the key ingredients to creating an innovative workforce, a student population that is absolutely curious and passionate about learning, and this school is doing it the right way."

"This is the type of thing that could really make a difference in people's lives," he said, "not just enriching but giving the fundamental values of what builds a great society."

But while Ma was looking at a wonderful, small neighborhood  school, J.C. Brizard (who attended Ma's performance) and the mayor were gazing over a list of confusing and unreliable standardized test scores. The result -- Telpochcalli has now been added to the board's list of 140 schools supposedly meeting the criteria for closing.

What a tragic loss to the community that would be.