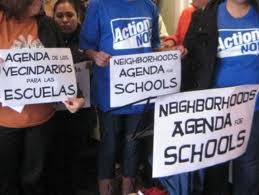 "CPS policies have destabilized schools in our community," said Jeanette Taylor, a parent leader with the Kenwood group whose children attend Mollison and Robinson schools, both of which have been on academic probation for several years. "We're all fighting together. They aren't closing any more schools until they do right by us." -- Chicago Tribune

Resistance is building to Rahm Emanuel's latest school-closing plan. The plan -- which in effect is a school privatization plan -- calls for the closing of neighborhood schools and replacing many of them with privately-managed, non-union, charter schools. Many of Chicago's community-based organizations are organizing and rallying their supporters, in a united front with the Chicago Teachers Union, to stop the closures. Nine community groups from Albany Park to Roseland Tuesday presented a “Neighborhoods Agenda for Schools,” a wide-ranging plan that calls for significant investment in struggling neighborhood schools rather than school closures. Last Tuesday, about 40 people jammed into the lobby of the Logan Square Neighborhood Association’s headquarters and held a press conference to announce their opposition.


"Last week at a community hearing on school closings, audience members questioned  Sicat’s decision-making power and demanded that the district invest in existing schools rather than replace them."

CTU Teach-In on School Closings Sat, Dec 03, 10:00 AM - 2:00 PM
King College Prep H.S. 4445 s. Drexel Blvd.
Jitu Brown of the Kenwood Oakland Community Organization, which has developed its own blueprint to improve failing schools in Bronzeville, is quoted in the Tribune saying the he and members of other local organizations met with schools CEO Jean-Claude Brizard and other officials this week. They tried to get him to agree to a one-year moratorium on closing schools in Bronzeville, Brown said.

The organizations representing groups from the far North Side of the city to the far South Side issued what they called “A Neighborhood Agenda for Schools.” They want CPS to work more closely with organizations to make all neighborhood schools community schools, an effort supported by former CEO Arne Duncan to bring services from after school programs to GED classes onto campuses. They also want CPS to officially embrace Grow Your Own Teachers, which encourages people from low-income communities to go into teaching, and VOYCE, an initiative that empowers teenagers to come up with solutions to problems in schools.


"On the positive side, they are reaching out to us. But it's more about them telling us what to do as opposed to listening and exchanging ideas," Brown said. "What they want is a buy into what they want to do."

The Chicago Teachers Union will kick things off tomorrow from 10 a.m.- 2 p.m. with a teach-in on preventing school closings. The teach-in is co-sponsored by Teachers For Social Justice, Action Now, Kenwood Oakland Community Organization, Grassroots Collaborative and Albany Park Neighborhood Council and supported by SOS Chicago and other groups of education activists.
Posted by Mike Klonsky at 11:16 AM