Mayoral control gets an F from New Yorkers 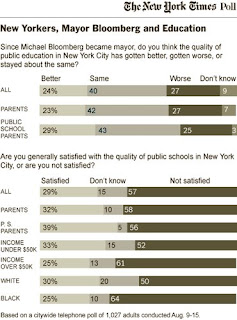 Arne Duncan has made mayoral control of urban school districts, an essential piece of his top-down school reform model. Duncan went so far as to say he would consider his time as education secretary a “failure” if more mayors didn’t take over city school systems by the end of his tenure.

But, according to a New York Times poll, New Yorkers are broadly dissatisfied with the quality of their public schools, and most say the city’s school system has stagnated or declined since Mayor Bloomberg took control of it nine years ago. In follow-up interviews, poll respondents expressed various reasons for their dissatisfaction, including frustration over the system of school choice, services for disabled children and the emphasis on standardized tests.


“Bloomberg treats the schools and the education system like a business,” said Liette Pedraza-Tucker, 41, a film editor from Brooklyn. “But schools aren’t a business. Kids need nurturing, not to be treated like adults.”

Robert Kemp, 74, a retired bank officer from Queens, said: “What they’re teaching is too narrowly focused. It’s all ‘Let’s pass tests’; it’s not about turning out educated kids.”

The poll also showed that a year of political attacks on teachers and their unions nationally hasn't registered with New Yorkers. Of those who responded, most praised classroom teachers and favored the teachers union and its call for smaller class sizes.
Posted by Mike Klonsky at 9:21 AM