Too poor to play? I doubt it. 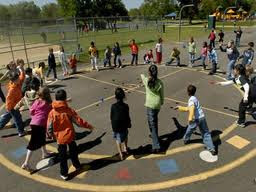 As you probably know by now, there's no love lost between me and corporate reformers who dismiss  poverty and racism as mere "excuses," used by apologists for failing schools and poor teaching.

But I also have difficulty understanding some otherwise well-meaning educators who look at kids growing up in poverty as if they had some incurable disease and were therefore incapable of learning complex ideas or critical thinking skills. Even worse are those who assume that poor kids aren't even capable of partaking in group or play activities with each other or with other children.

I was troubled by an AP wire story by Dan Stockman which appeared in Saturday's Sun-Times as "Teaching the poorest to work, play"  and which began this way:


There are no swings at Hammond’s Lafayette Elementary School. In fact, there’s almost no playground equipment at all. That’s OK, though, because they don’t really do outside recess here. They can’t: The children of Lafayette Elementary School don’t know how to play with one another. “They have no social skills,” Principal Colette Weitknecht says.

The article rightfully goes on to expose the vast discrepancy between the resources available to kids in school in upscale Carmel, a three-hour drive down Hwy 65, and those in Lake County, where the median family income is $10, 581.
Given the lack of resources, the teachers at Lafayette Elementary seem to be doing a fine job. Measurable learning outcomes are steadily rising.  But the very idea the children in the school are incapable of play is disturbing and based on wrong assumptions about child development or possibly about race and culture. Even if Principal Weitknecht's assumptions were true (which they aren't), they would logically lead to just the opposite conclusion. More, not less organized play. More time for recess, not less. More equipment, not empty, barren yards with little or no supervision. In fact, more time and resources for play is precisely what early childhood teaching and learning should be about, regardless of family income.
No swing sets or recess at Lafayette Elementary -- not okay!
Want to know more about the importance of free exploration, wonder, imagination, and play to the learning and growth of children? Read:
Posted by Mike Klonsky at 9:16 PM

Email ThisBlogThis!Share to TwitterShare to FacebookShare to Pinterest
Labels: play