Clears the way for assault on Chicago's teachers


“This is not a bill to attack the teachers,” said state Sen. Kimberly Lightford, D-Maywood, who sponsored the bill. 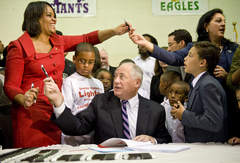 Illinois Gov. Quinn has signed into law SB7, which severely weakens the power of the state's teachers and their unions to bargain collectively. What makes SB7 different from legislation pushed by Tea Party govs and passed in Wisconsin, Ohio, and Michigan, is that the Illinois bill, now law, isn't as draconian. Public employees unions haven't been outlawed completely. Perhaps a more important difference is that the bill was passed with support from the state's three largest teachers unions, pretty much nullifying any opposition from the rank-and-file, wavering politicians, community activists or from other unions.

This "collaboration" is being hailed by corporate reformers and by some union leaders as a model for the rest of the nation and as a better alternative to the "chaos" and open class warfare in Wisconsin. We shall see whether or not that's true or whether it just makes that warfare more one-sided.

One thing you can count on though, is that the current assault on public schools,  teachers and other public employees will continue as the state's corporate interests use pocket politicians to increase profits and their power position vis-a-vis the unions. For IL teachers, it will still be possible, though more difficult to resist the next attempt at a  pension grab coming up in the fall veto session.

Chicago teachers will now have to face a push by corporate reformers and the mayor to have fewer teachers teaching larger classes, with less job protection, working longer hours and more days for less pay, in the upcoming contract negotiations. The new law makes teacher tenure and layoffs contingent on student achievement based even more narrowly on standardized test scores and makes it easier to dismiss veteran teachers without due process.

With Rahm Emanuel now running the city's schools, we can expect to see a continuation of the disastrous Renaissance 2010 strategy of closing neighborhood schools and replacing them with privately-managed charter schools and replacing union teachers with lower-paid, non-union temps. Even new schools CEO J.C. Brizard admits to Ren10's "collateral damage" as being the "creation of two different [and unequal] school systems."

If there's to be a push-back from the CTU on any of this (including the take-away of the 4% pay raise won in the last contract negotiations), they will have to make it with one hand tied behind their back because of the SB7 bill that they themselves supported.
Posted by Mike Klonsky at 6:52 AM